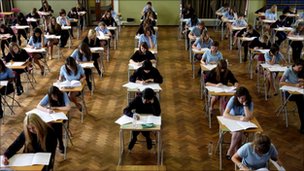 The British examinations system has come under a great deal of political scrutiny of late. The education secretary, Michael Gove, has promised a total overhaul of the system within the next few years, but has created uncertainty as he appears unable to settle on firm proposals

At present, secondary level examinations are administered by competing exam boards; the Assessment and Qualifications Alliance; EdExcel; Oxford, Cambridge and RSA Examinations; and the Welsh Joint Education Committee. They offer largely the same qualifications, but set their own exam papers and compete for custom from schools. Many point out the trend that arises from this is for boards to set progressively easier exams in order to appeal to teachers. There is increasing demand for this flawed system to be overhauled, and it is amongst this atmosphere that the latest exam results were released.

Last week, teenagers received their General Certificate of Secondary Education (GCSE) grades. For the first year since 1988, there was a fall in the percentage of candidates who received “good” grades, that is an A*-C. Some have hailed this as proof that Michael Gove is bringing the alleged “grade inflation” under control. As part of Gove’s attempt to “toughen up” secondary education, the Department for Education requires schools to achieve a 40% GCSE pass rate (candidates receiving at least five good grades) or face being shut down, merged with a more successful school, or being converted into an academy, presenting a threat to jobs. Teachers’ trade unions have claimed that Gove has bullied (allegedly) independent boards into deliberately raising the grade boundaries at the last moment. It is thought that as many as 10,000 teenagers have missed out on a C grade where they would have obtained it a few months before.

Some groups are threatening legal action against exam boards on age equality grounds; students born a year before would have obtained better grades for the same performance. However, previous cases would suggest that legal action would be unsuccessful. When a new top grade, A*, was introduced in the mid 1990s, older students arguably suffered age discrimination, as they had no prospect of obtaining a grade that did not exist, and so were being unfairly compared to younger peers.

Gove hoped to eliminate the problem of unfair comparison by abolishing the GCSE and replacing it with a two tier system, as existed before the 1980s. Under original proposals, advanced students would be offered explicitly harder ‘O-Levels’, while the less-able would take simpler ‘CSEs’. Critics pointed out that this would be damaging the future prospects and employability of students at just 14 years old, as CSEs would clearly be low-value. Furthermore, GCSE candidates already have the option of taking easier GSCE papers targeted at those aiming for a C grade or lower.

This prompted a further ‘u-turn’ by Gove, who is not unfamiliar with rapid policy revisions, who still advocates a return to ‘O-Levels’, but not to CSEs, which raises the question of how lower-ability students will be provided for.

The UK government should ask itself what it aims to achieve in reforming the exams system. The Education Secretary’s platform of regressing to an old-fashioned education system is the exact opposite of what should be done as the nation prepares its youth for the modern world. The arguments for restricting competition between boards are sound, but distorting grades is not fair or acceptable. There may be an argument in favour of harder exams, though this should only be done once GCSEs have been scrapped, in order to emphasise the different nature of the qualifications.

Perhaps now is the time to consider if GCSEs should be abolished without replacement. British students are now required to continue in full-time education until the age of 18, and so all students will take qualifications, usually A-Levels, beyond the age of 16. Perhaps the familiar custom of teenagers enduring four years of endless revision and exam stress is no longer necessary.