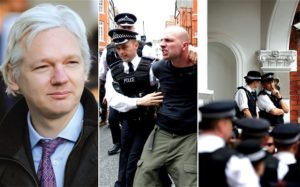 Claiming political asylum under the United Nations Declaration of Human Rights after his last ditched attempt against Swedish extradition was denied in the British high court.

Now after a month of watching and waiting, the British Government has issued a statement of intent in a recent letter stating that they would “take action to arrest Mr. Assange in the current premises of the Embassy” if Assange’s continued asylum is upheld.

The full letter that was sent to the Ecuadorian authorities can be seen here:

We are aware, and surprised by media reports in the last 24 hours, that Ecuador is about to take a decision and proposes to grant asylum to Mr. Assange. The reports quote official sources. We note that the (Ecuadorean) President (Rafael Correa) has stated that no decision has yet been made.

We are concerned, if true, that this might undermine our efforts to agree a joint text setting out the positions of both countries, allowing Mr. Assange to leave the Embassy.

As we have previously set out, we must meet our legal obligations under the European Arrest Warrant Framework Decision and the Extradition Act 2003, to arrest Mr. Assange and extradite him to Sweden. We remain committed to working with you amicably to resolve this matter. But we must be absolutely clear this means that should we receive a request for safe passage for Mr. Assange, after granting asylum, this would be refused, in line with our legal obligations.

In that light, and given the statements of the last 24 hours, we hope that you are prepared to continue to engage with the ongoing diplomatic discussions. We continue to believe that a solution is possible on the basis of a jointly agreed text, which would accompany Mr. Assange exiting the Embassy, and leading to his extradition.

We have a further meeting scheduled for Thursday 16th August. Given the statements made in Quito overnight, about an imminent decision, should we take it this meeting will be the final one to agree a joint text?

We have to reiterate that we consider continued use of diplomatic premises in this way, to be incompatible with the VCDR (Vienna Convention on Diplomatic Relations) and not sustainable, and that we have already made clear to you the serious implications for our diplomatic relations.

You should be aware that there is a legal basis in the U.K. the Diplomatic and Consular Premises Act, which would allow us to take action to arrest Mr. Assange in the current premises of the Embassy.

We very much hope not to get this point, but if you cannot resolve the issue of Mr. Assange’s presence on your premises, this route is open to us.

We understand the importance to you of the issues raised by Mr. Assange, and the strong public pressure in country. But we still have to resolve the situation on the ground, here in the U.K., in line with our legal obligations. We have endeavoured to develop a joint text, which helps both meet your concerns, and presentational needs.

We believe a joint text and a voluntary surrender by Mr. Assange is the best way forward.

The intentions of the government are made obvious in this letter, but not the result and the following consequences of these actions. Whilst the British Government states it is resolved to an amicable solution, the statement also indicates not only legal precedent but apparent intent to enter the Ecuadorian embassy. This threat emerged despite the assumed sanctity of diplomatic missions. Indeed entering an embassy without permission is technically an invasion of sovereign territory. This begs the question – would the British be willing to storm a foreign embassy, and if so what could we expect?

The last time a local government deemed it just to storm a foreign embassy was over 30 years ago in Liberia. On June 14th, 1980, the Liberian army invaded the French embassy in Monrovia in an attempt to arrest Adolphus Tolbert, the son of a toppled president. French relations with the nation were heavily damaged with the French ambassador claiming it “a flagrant violation of a diplomatic mission and of international legal norms”. That was a country in turmoil that wanted answers after the ex-president had died earlier that year; this is a major nation attacking another to retain its grasp on military confidentiality. Entering a foreign country’s embassy without permission to arrest one of its political refugees can lead to some serious complications, so what does this entail for David Cameron and his coalition government?

On 21st of August, Ecuadorian President Rafael Correa urged Britain against such force as he deemed it would be “political suicide”, causing a major backlash and making their embassies all around the world void of diplomatic immunity. Former diplomat and writer for Diplomacy.edu, Jovan Kurbalija, stated that “The old adage of what goes around comes around applies in diplomacy more than in other professions” producing this notion that Britain’s diplomatic missions across the world could lack legitimacy and be exposed to the same treatment that they themselves have delivered.

It is hard to say what else could happen as a direct breach of diplomatic constitution by one nation towards another has rarely been witnessed before. However it is safe to say that not only would this sever all diplomatic relations between the UK and Ecuador, it would fuel cause for conflict, something which some of Ecuador’s allies would welcome.
One should note that one of Ecuador’s strongest backers in their fight is one of Britain’s old foes, Argentina. Should Britain enflame the situation through a direct attack on the Ecuadorean embassy this would no doubt add legitimacy to Argentina’s fight for the Falklands. This year has seen resurgence in the nation’s interest in the islands since it was discovered that the islands are host to a huge reservoir of black gold. This would thus defer their nation’s attention from their poor economic state, which has seen inflation rates rise to a massive 33%, and boost President Kirchner’s support in office. If the UK chose to go through with their arrest of Assange this will not only attack Ecuador but the whole of South America, and they will strike back.

However Cameron has been plied with pressure from the United States government in order to extradite Assange successfully and it appears to be an at-all-costs mission statement. Former British diplomat, Craig Murray posted on his blog that the Obama administration had forced the UK government into “private confirmation to enter the Ecuadorean embassy and seize Julian Assange” and that such a show of force would be “beyond any argument” and a “blatant breach of the Vienna Convention of 1961” Murray’s latest posts cannot help but portray a scene of immorality and unjust back handed tactics.

Entering the embassy to arrest Julian Assange would not only destroy diplomatic ties between Ecuador and Great Britain, it would provoke the traditionally loyal South American bloc. Does Britain think it is genuinely doing the right thing or does the UK want to please its ‘allies’ and strengthen the ‘special relationship’? It is easy to say that Cameron certainly would not want to be in this situation, but it is difficult to see how this will be resolved without the UK making a decision about whose partnership they value more.