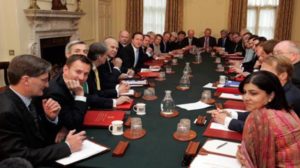 Prime Minister David Cameron has always been a firm believer in in continuity within the coalition, which is a valid belief. However, he has caused quite a stir in his reshuffle amongst the Cabinet.

His freedom to hire and fire as he pleases has always been quite constricted by the coalition but, despite this, has still made changes to the “front ranking Conservatives”. The PM’s “pruning of the ranks”, as it has been called, has two aims: one, to reconnect the Parliamentary party after disagreements about his capability to lead, along with the disapproving murmurs from backbenchers agreeing with the questionable capability of the PM; and two, to close the widening gap between the reformist rhetoric and delivery.
It is debatable whether David Cameron has either achieved either aim with the reshuffle.

Rob Wilson, Conservative MP for Reading East, says the reshuffled is “part of the process of the divorce with the Liberal Democrats”. He told BBC Radio Berkshire the coalition is “winding down” and that David Cameron would not care if Lib Dems were unhappy with changes made.

Mr Wilson also predicts that the relationship with the Lib Dems could shift within eighteen months to a “confidence-and-supply” partnership. This would mean that the Lib Dems would back up the Conservatives on any major votes, for example, the Budget, but would still retain the right to decide whether to support their other policies on a case by case basis. Is this a prediction that the Tories will grow stronger or hopefulness that the underdog Lib Dems can make them look good and prevent them falling from power? What are Nick Clegg’s opinions on the ‘prediction’ that his party are set to become nothing more than cheerleaders for the Tories?
Mr Wilson has turned down a new job offer in the reshuffle in the whips’ office and his excuse? He refused the role because he “did not want to be silenced in Parliament”.

Whether the reshuffle will work or not is debateable as stories that were intended to move Welfare Secretary Iain Duncan Smith were flatly rejected, further diminishing David Cameron’s authority, and also contributing to the impression that he is weak.
However, the reshuffle hints at some potential policy changes. For example, replacing Justine Greening in the department of sport removes one of the obstacles preventing the construction of the third runway at Heathrow airport.

What it all boils down to is not the Cabinet reshuffle, but the state of the country’s economy, which ultimately is what David Cameron’s job as Prime Minister depends on.