Do the Shuffle… the government shuffle 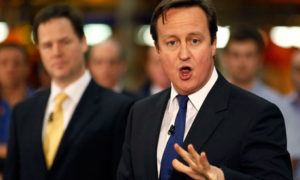 There has been great excitement in the political world following the first major reshuffle since the coalition began. There have been rumours and counter rumours, gossip and speculation and extensive analysis of what each ministerial movement will mean for the government and the country.

One thing is certain; David Cameron has tried desperately to appease his rebellious right wingers. Ken Clarke, the more liberal Justice Secretary who has emphasised prisoner rehabilitation over traditional Tory toughness and who is too sympathetic to the EU and the European Court of Human Rights for the liking of many Conservatives, has been replaced by Chris Grayling. Grayling is popular amongst those to the right of the party having offered some pleasing sound bites against immigration and Europe. However, he will certainly be less popular amongst the Liberal Democrats for whom Ken Clarke, given his more liberal attitude to criminal justice and human rights, was a natural ally.

Elsewhere Caroline Spellman, who appeared more receptive to green arguments than the average Conservative, has been moved from Environment and replaced by Owen Paterson who is regarded as being far more of a climate change sceptic. Another head on the platter of the right wing Tory troublemakers is the now former Conservative Party co-chairman, Baroness Warsi. Warsi is considered a light weight by the Tory right, who have long demanded a stronger, and more traditionally Conservative figure to act as the party’s spokesperson at times of crisis. Her departure was one of the primary demands from Cameron’s rebellious back benchers. Her last ditch plea to Cameron to allow her to continue in the role fell on deaf ears.

Another source of intrigue for the political commentariat was the non-movement of Iain Duncan Smith, the Work and Pensions Secretary. It is widely reported that Cameron was keen for Duncan Smith to fill the vacancy left by Ken Clarke’s departure at the Ministry of Justice. Duncan Smith refused to move, determined to see through his ambitious changes to the welfare system. Cameron’s desire to move Duncan Smith probably had its roots in the Treasury. George Osborne, failing miserably to control public spending and eliminate the deficit, has his eyes set firmly on the welfare budget as a target for even deeper cuts. Removing Duncan Smith, who has firmly resisted further attacks on his budget, would have made life considerably easier for the Chancellor who at present needs all the help he can get.

Outside of the insular Westminster bubble the specifics of this reshuffle, like many reshuffles in the past, will be of little concern to the general public. Many of the names will be little known. For the man on the Clapham omnibus it is the substance and effect of government policy that matters, not the comings and goings of ministers. What is clear is that this first significant reshuffle since the coalition was formed will not herald the beginning of a new policy agenda. There may be a few new faces around the Cabinet table and a few new voices to grace our airwaves, trying to sell the government’s strategy. Unfortunately that is all that will be new. On the single greatest issue facing this government, the economy, there will be no change of direction. With both Cameron and Osborne ideologically and politically wedded to deep cuts in public spending, despite the disastrous impact on economic growth, no reshuffle will instigate a new course of action. Whatever its composition, the government will not relinquish its harmful obsession with austerity.

Will companies and their designers soon hit a ‘brick wall?’