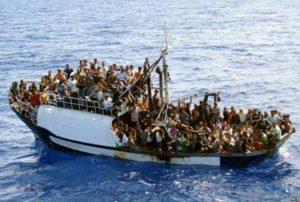 A rescue operation which took place the 16th August in Malta saved 158 people sitting in two separate migrant boats. A first dinghy with was spotted by the merchant ship Victoria 6, which communicated its location to Malta’s Rescue Coordination Center. The vessel in question was sinking fast and had two dead on board. The Victoria 6 also reported that the boat’s passengers were in serious need of medication. While the migrants were being transferred to the Victoria 6, two of them fell and are still missing. Meanwhile a second boat was intercepted by a Maltese patrol boat, which took its occupants on board. Between twenty and thirty individuals were later transferred to the Mater Dei state hospital due to sun stroke, severe dehydration and malnutrition. Another two persons died after the rescue, bringing the number of deaths to six.

The death toll among those crossing the Mediterranean Sea during the first six months of 2012 amounts to at least 170 individuals. Irregular border crossing has always been a risky business; the occupants of the overloaded boat have died while crossing the sea because of adverse weather conditions, thirst, mechanical problems or human error. The independent blog Fortress Europe documents 13417 deaths since 1988, of which 6226 occurred in the Sicily Channel only. Human Rights Watch has justly pointed out that these deaths have taken place in routes frequented by many military and civilian vessels which are subject to an international maritime law binding them to rescue ships in distress. This law is codified in international agreements such as the International Convention for the Safety of Life at Sea (1974) and the United Nations Convention on the Law of the Seas (1982). These international codes oblige all ship-masters to provide swift assistance to persons in distress if they are in position to provide help. States also have an obligation to ensure effective rescue operations in designated areas.

Countries such as Malta, Italy and Spain have saved many lives through search and rescue missions, but their priority has been to prevent boat migration, even if this meant violating the migrants’ rights. Such a behavior can be seen in the push-back policy followed by the Italian government, who were chastised by the ruling by European Court of Human Rights on the Hirsi v Italy case this February. Also the EU’s border agency Frontex has become increasingly involved in joint maritime operations, which sometimes involved the cooperation of countries of departure such as Senegal. These operations have as main objective to prevent the departure of migrants from their countries; they so may prevent those people from availing themselves of the rights that apply within EU territory.

The future European response to boat migration may very well be EUROSUR, a surveillance system of the Mediterranean that is in phase of negotiation between the European Parliament and the European Council. Human Rights Watch notes that the founding legislation of EUROSUR mentions the protection of the migrants’ rights as one of its priorities, but also that the same legislation fails to outline any procedure which ensures that rescue at sea is implemented in order to respect those rights. All this suggests that the brand new EUROSUR will perpetuate the traditional policy of preventing arrivals from the sea.

The truth is that European states have been reluctant to take up the legal responsibilities coming with the rescue and the disembarkation of the migrants. Examples of this abound: there is Malta’s refusal to ratify the 2004 amendment to the International Convention for the Safety of Life at Sea, or its dispute with Italy on where those rescued close to Lampedusa should be disembarked. There are also the infamous deals between the Italian and Libyan governments or the fact that in August 2011 Spain refused to allow the disembarkation of those migrants rescued by one of its frigates.

The results of such “keep them out” mentality are in front of everyone’s eyes; on one hand the migration through the Mediterranean has not stopped and on the other hand there have been too many avoidable deaths.

Edited and collected by Bryony Cottam