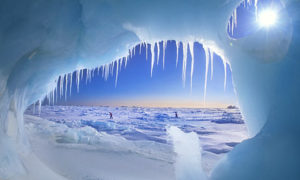 Usually when we think about extinction, we think of natural disasters or deforestation. Most often we associate it with two words – two words which have been on everybody’s lips for the last decade: climate change. Many areas of the globe have been affected by recent climate change, with the arctic being one region that could face dire consequences if climate change continues. According to GREENPEACE’s ‘Save the Arctic’ campaign, the arctic, which is made up of a floating ice cap, has decreased in volume by ¾ in the last 30 years alone. It is disappearing rapidly due to our use of fossil fuels which are not only impure but highly unclean.

Somebody who has made a large contribution to this area is Richard Muller with the Berkeley Earth Surface Temperature project (more commonly known as BEST). The aim of the project was to provide an environment equipped with the necessary data and relevant statistics to determine whether the earth’s temperature has risen and any possible causes for change. Muller believed it was important to inform the public as to why certain changes within the planet were occurring. In July of 2012 the New York Times published a new report written by the BEST scientists, in which it was made clear that the temperature of the globe has indeed warmed and that the average temperature has increased by 1.4 °C over the last 250 years. Even more startling, the main increase has taken place in the last 50 years. In the report Muller stated “Last year, following an intensive research effort involving a dozen scientists, I concluded that global warming was real… I’m now going a step further: Humans are almost entirely the cause.” In other words, we have started this change and only we have the power to stop it. But why does it matter?

It matters for several reasons. Firstly it could be the cause severe flooding, an effect that we are already seeing, as the ice melts faster; there has already been more frequent and severe flooding in the parts of the UK, such as West Yorkshire and Gateshead. Secondly, the ice fulfils a very important function. It keeps the earth cool, regulating the planet’s overall temperature and, consequently, the weather. The ice reflects the heat of the sun which keeps the planet cool, affects our weather which in turn allows us to grow the food on which our livelihoods and lives depend. If weather systems changed dramatically then it would affect when or whether certain foods could be grown, affecting both people and animals. Scientists are worried and say that if the ice continues shrinking at such an alarming rate then it is possible the arctic could lose all of its ice. This would cause widespread damage – not only for the polar bears but for the people too.

As more and more fuel is needed in order to power our ever evolving world, energy sources are beginning to run out. Advances in wind, solar and hydro power are taking place but they are not yet at the stage to compete with other (unfortunately unsustainable) energy sources. In addition the costs of running such sustainable energy sources are extremely high. So what’s the answer?

Oil companies want to start drilling; the arctic is the next stop on the hunt for oil. BP, Exxon and Shell are just a few of these companies who are interested in looking for oil in the arctic. They are calling it the Arctic Oil Rush as there are potential stores of 90 billion barrels of oil. But although this may sound like a lot, in real terms it will only last approximately three years, raising the question of whether it would be worth looking for oil under the ice. We have seen what happens when an oil spill strikes, such as in the Gulf of Mexico in 2010, a crisis which only officially stopped 6 months after it began. Surely this should be a shining beacon of warning. This oil spill was not the first and definitely will not be the last. In order to reach the oil, companies must remove icebergs to clear the way for their oil rigs, a highly risky procedure. Government experts have stated that an event similar to the Gulf of Mexico in the arctic would be ‘almost impossible’ to cope with.

While greener energy sources are available they have not yet become a solution to the problem. Hydro and electric powered cars are being developed and as technology evolves these will eventually be highly effective; after all it is cars that play a huge part in global warming. Solar panels and wind turbines are being used in moderation, but the sad fact is these sustainable methods cost significantly more than the unsustainable ones that are responsible for the plight of the arctic. Yes we need energy, yes we are running out of sources, but now is the time to use our imaginations. Now is not the time to be destroying our precious planet earth!