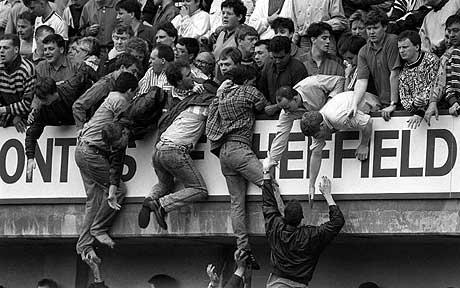 Ex-chief Constable of South Yorkshire police, Richard Wells, insists that a criminal investigation in to police handling on the 1989 Hillsborough football disaster must happen.
In April 1989, 96 Liverpool fans died after a crush on an overcrowded terrace at Sheffield Wednesday’s football ground.
An independent investigation by the Hillsborough Panel has now revealed damning evidence that suggests police were responsible for changing and deleting parts of the police reports in order to cover up the blame for their own blunders. Instead, they laid the blame on Liverpool fans. The report said that the police had made “strenuous” attempts to deflect the blame and had so far been successful, before revealing that 41 of the 96 that died could have been saved if emergency services had acted faster.
It was reported that the victims of the incident were all dead or brain dead by 3.15pm, fifteen minutes after the football match had kicked off, following the original inquests. However, after families challenging this for over two decades, the Hillsborough Panel’s medical advisor Dr Bill Kirkup said that they found up to 41 of the victims could have saved, if they had received medical treatment.
The report stated that people were left dying and dead because ambulance crews could not get to them to give medical attention to as police and public vehicles were everywhere. Leading ambulanceman John Flack told The Sun that the police were “clueless” in their response to the tragedy.
The report released 400,000 documents revealing that 116 police documents were tampered with in order for unflattering and somewhat risky comments that would suggest the police were to blame to be removed, which would cover up their mistakes.
Real documents are said to have been mainly admissions of worry and the feeling of loss of control during the disaster.
Furthermore, in his report of the incident, PC Maxwell Groome highlighted the questionable decision to replace Chief Superintendent Brian Mole, a man with plenty of experience policing football matches, with inexperience Chief Superintendent David Duckenfield, who received blame for opening the gates of the stadium to allow the crush of fans enter the grounds.
The Hillsborough report has caused a stir amongst everyone, right from the top in Parliament all the way to the families of the tragic victims. It has revealed many secrets and blunders that have been covered up for twenty three years.
Following the publication of the Hillsborough Report – a two-inch thick, 395 page document – Prime Minister David Cameron has apologised to families of the victims for the “double injustice”.
The Sun has also apologised for their participation in printing the inaccurate story of Liverpool fans being to blame for the disaster and call it their “gravest error”.
BY: Rebecca Harris