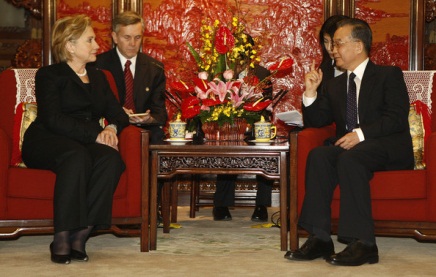 With China already engaged in a growing conflict with its fellow Asian nations over territorial boundaries in the South China Sea, and with tension becoming apparent between themselves and the US over American involvement on the matter, US State Secretary Hillary Clinton has travelled to the People’s Republic to meet with Chinese President Hu Jintau to cool any unnecessary arguments between the US and China, as territorial conflicts in the region continue.
Only last week, Clinton visited Indonesia to talk to her counterpart there, Marty Natalegawa, a country with which China is in dispute over the islands territories in the South China Sea, and despite saying that the US were not going to be taking any position on the situation, she went on record as saying: “We believe the nations of the region should work collaboratively to resolve disputes without coercion”.
“That is why we encourage Asean and China to take meaningful progress toward finalising a comprehensive code of conduct”.
Since then, Beijing has accused Washington and US of interfering with their regional affairs which showed a lack of respect for the current neutral status between the two nations that both countries are looking to uphold. Indeed, before Clinton had even arrived on Chinese soil, State newspapers were already accusing America of a “lack of neutrality” and a commentary run on Monday on Chinese State television by the Xinhua news agency said that America needed to prove it came back to Asia “as a peacemaker, not a troublemaker”. It came as no surprise that the pressure was on Clinton to begin the reconciliation over the matter as she shook hands with President Jintau at the Great Hall of the People.
Both Mrs. Clinton and Mr. Hu agree that the US and China are dependent on one another, especially when it comes to international trading, and Mrs. Clinton was quick to assure Mr. Hu that during President Obama’s tenure in the White House, the constant communication between both the US and China has helped both nations co-operate and move forward together. Clinton told Mr. Hu that “Because we have invested in your leadership and President Obama’s leadership in such intensive communication and now are working in areas of practical co-operation, we believe that our relationship is on a strong, solid base”.
Mrs. Clinton was also expected to meet the man who is the favourite to succeed President Jintau, Xi Jinping, at the end of October. However, Jinping cancelled his meeting with Clinton in mysterious circumstances, raising further questions as to whether China as a nation were willing to see eye to eye with the Americans in the wake of China’s recent criticism of the US’s involvement in the Asia-Pacific affairs. On the other hand though, Jinping is also believed to have cancelled meetings with Russian officials and the Prime Minister of Singapore due to a back injury, although this has not yet been confirmed.
In the eyes of China, America is seen as strong allies with Japan, with whom China is currently in conflict due to territorial disputes over the disputed islands of the Paracels, Spratlys and the Scarborough Shoal in the South China Sea. China has also seen America’s raised presence in Asia as part of President Obama’s ‘Pivot to Asia’ initiative, which looks to give the US some diplomatic weight in Asia as China begin to assert themselves more during their current conflict with their fellow Asian nations.
America’s military presence in Asia and their allegiance with Japan is something that is regularly portrayed and expressed on Chinese State Television. However Clinton denies any American military presence in Asia as a measure being taken to contain China should tensions rise further, but this presence could possibly be seen as a strategy to hold some influence in Asia following the wars on Afghanistan and Iraq.
Reportedly, the US want have 60% of its warships based in the Asia-Pacific region by 2020. This seems like a very large percentage, given that China is already under the assumption that the US are looking to ‘contain’ them during their affairs in the South China Sea. British citizens might feel annoyance if they knew that the US had warships circling around the Isle of Wight and along the rest of the UK coastline; for similar reasons it would come as no surprise if China did everything they could to try and stop the US achieving their goal on this matter.
It seems then that the US have got under the skin of the Chinese hierarchy at a rather inappropriate time, given that China is currently immersed in their own problems with their geographical neighbours. Clinton’s recent involvement in the Asia-Pacific region seems to have indicated, in the eyes of the Chinese, that the US are becoming involved in issues not of their own as a ploy to gain some political influence. This may be to have resources they can utilise should the spark be reignited with Afghanistan and Iraq, or to in fact enforce their long-term plans to assert themselves by improving relations with China’s neighbouring countries during the territorial conflicts. It is true that the US and China have not always agreed on political matters and things might get even more tricky as the situation continues to bubble in the Far East.
BY: Robert Pritchard