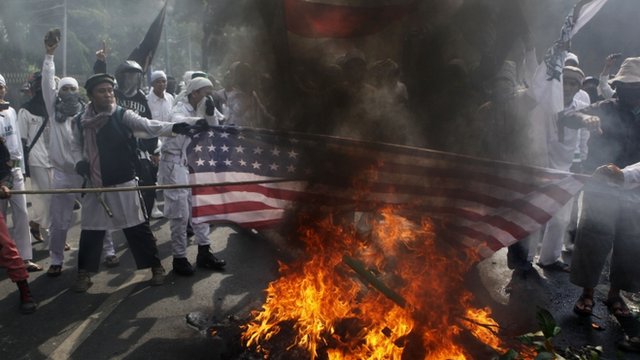 Over the last few weeks, the Muslim world has seen protests outside US embassies spread considerably. On Wednesday the Embassy in the Yemeni capital, Sanaa, was stormed before the protestors were pushed back by security forces; American flags were burnt in Cairo on the anniversary of 9/11 and in Benghazi, Libya’s second city, four US diplomatic personnel were killed in a fire started at the American consulate. Among the dead was veteran US diplomat and Ambassador to Libya, J Christopher Stevens.

The protests come after a film, said to depict and insult the Prophet Muhammed, was uploaded to YouTube and clips were spread online. Little is known about the film which was uploaded to YouTube by an account called ‘Sambacile’, though this is reported by some news agencies to be a pseudonym. The film was being promoted by two expatriate Egyptian Copts (an Egyptian Christian group) and was allegedly written and directed by an Israeli American. The film, entitled ‘Innocence of Muslims’ has been described as “very badly made and cheaply produced, with poor acting and little in the way of storyline” by a reporter at the BBC.

The film and the violence has been condemned by governments around the world, its few supporters are allegedly a handful of American Jews who helped fund the project as well as other controversial figures like Terry Jones, the pastor who caused deadly riots in Afghanistan when he publicly threatened to burn copies of the Qu’uran.

J Christopher Stevens, US ambassador to Libya, died from inhaling smoke after the US consulate in Benghazi was set alight by protestors. Stevens was a 21 year veteran of the US diplomatic service, he spoke Arabic and French and had been America’s leading envoy in Libya for some years; his work included helping garner support for the rebels who eventually overthrew the late dictator, Muammar Gaddafi. Barack Obama called him “a courageous and exemplary representative of the United States”.

Clips of the video have been spread by news stations all over the region. Protests have supposedly been organised mainly by Salafist groups, although after the particular violence in that took place in Benghazi it has been suggested that the protests are being hijacked by more radical Islamist groups.

Libyan authorities have said they have arrested several people in connection with the Benghazi consulate fire and death of Ambassador Stevens. US missions around the Muslim world are prepping themselves for another day of protests.