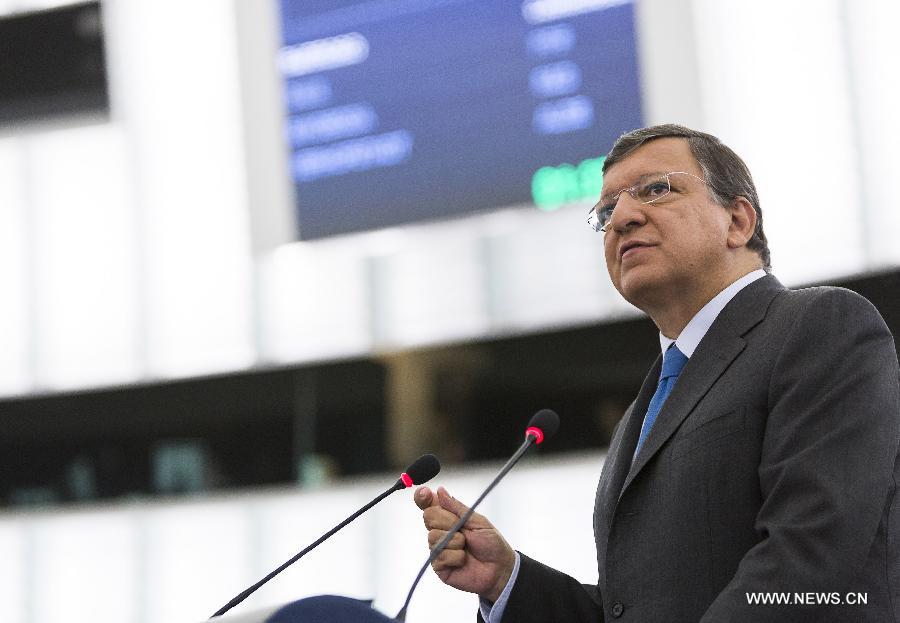 On Wednesday, while PMQs and a statement on the Hillsborough disaster dominated the domestic headlines, another important speech was being delivered on the continent. President of the European Commission José Manuel Barroso gave the annual State of the Union address to the European Parliament. Introduced through the Lisbon Treaty in order to enhance the democratic credentials of the EU, this was Barroso’s third speech and it felt like an important one – especially for the UK.

Although in its infancy as a procedure, the speech is an opportunity for the Commission President to grab the day’s headlines and set out his stall. In order words, the Commission gives an analysis of where it thinks the EU is at, and where it sees the EU going under the Commission’s direction. This is important as it is the European Commission who has the monopoly of initiative in proposing legislation. Indeed out with the European Council summits, which are by the nature of their composition dominated by domestic European leaders, the State of the Union address is a means of guaranteeing media coverage of the EU, and thus allowing the Commission to publicly present its intentions for the year ahead. Other UK headlines may have dominated the press here, but I hope some people were still listening.

In fact, I feel many parts of the speech were trying to talk directly to the UK and, perhaps, its government. When raising the issue of more integration, Barroso was quick to point out that the end goal is “not a superstate”. When discussing how quickly integration should progress he pointed out that “the speed will not be dictated by the slowest or most reluctant”. Each of these points speaks directly to the current British attitude in Europe. This attitude is quickly becoming a careless one to have.

What is being proposed by the European Commission is labelled as a “Decisive Deal for Europe”. This phrase applies as much to the UK as it applies to the most integrated Euro area members. Why do I say this? The resolution to the crisis, or at least the proposals being made to solve the roots of the crisis, can be found in ‘more Europe’ – moving towards “the completion of a deep and genuine economic union, based on a political union”. For the moment, proposals such as the new Banking Authority and the new Fiscal Compact Treaty on converging fiscal policies will apply only to Euro Area members. The difficulty is, all member states out with the Euro Area apart from the UK and Denmark, are legally obliged to one day join the single currency. This gives them a direct and vested interest in any new developments which will one day apply to them.

The UK therefore sees itself being put into a dangerously un-influential corner, in which its voice will be all but lost in the realm of European economic governance. Of course this exempts the UK from putting its hands in its pockets to “bank roll” weaker European economies. However, it will have to keep its hand its pockets where it might want to raise it to ask a question or to be heard. The Euro Area will set its own pace, with other member states being forced to keep up – and not the other way around. The Fiscal Compact Treaty, which Cameron attempted to prevent, is proof of this new pace.

Even specific policies set out by Barroso which in fact garner public support in the UK, such as the Financial Transactions Tax, mean the UK is finding itself increasingly isolated. Nonetheless, the EU will proceed with the policy through the means of enhanced cooperation, requiring the support of only 9 out of the 27 member states. In fact, well over two-thirds of EU countries support the measure. Is the UK government opposing the EU on policy, or on the principle of it being an EU proposal?

I do not want to see the UK being dragged into every policy arena proposed by the Commission, but nor do I like to see it oppose every policy put forward. The UK needs to be an active leader in Europe to allow it to be an active leader on the international stage. If the crisis revealed one thing, it revealed how interconnected and interdependent global economies are; the answer is not isolation and protectionism. To be an active leader in any debate it is necessary to be a constructive and willing participant. The current government has proven to be neither. Barroso’s Decisive Deal will soon turn out to be a decisive moment for the UK, there is no suggestion here that it will leave the room altogether. The UK is in real danger of being left alone in the corner, while the important discussions and decisions take place without it.