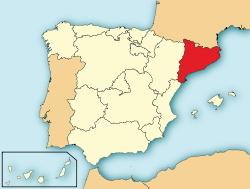 An unprecedented 1.5 millions people march in the streets of Barcelona this 11th September proved that the economic crisis hitting Spain has fuelled Catalan separatism. Indeed many Catalans, report Euronews, blame the government in Madrid for dragging down Spain’s most prosperous region.

The one of Catalonian secession is an issue that has been prominent since a long time, but has become even more relevant. In the Catalan Elections of 2010 pro-independence parties gathered 11,6% of the votes, becoming able to influence the political agenda of the Catalan government. At the same time a certain number of unofficial referendums (consultes populars) on independence held since September 2009 have expressed a widespread support for secession.
All this suggests not only that separatism is on the rise, but also that the possibility of a secession from Spain in the future must not be completely ruled out.
This said, is Catalonia entitled to independence ? Such is the question that this article will be trying to answer and this will be done by looking at the idea of self-determination and its relation to the states’ right to territorial integrity in international law.

Secessionist demands rely on the claim that a central government is impeding national self-determination, defined as “the right of all peoples to freely determinate their political status and freely pursue their economic, social and cultural development” (Resolution 1514 of the United Nations General Assembly). The idea of self-determination is today enshrined in the United Nations’ Charter and both the International Covenants of 1966. Other documents setting what international law says on self-determination are the already mentioned Resolution 1514 and Resolution 2625 of the United Nations General Assembly. These instruments affirm that the self-determination of peoples in one of the UN’s goals and that it is a legal right enjoyed by all peoples. If all of this seems to support secessionist movements around the world, Resolution 2625 also adds that states conducting themselves in compliance with international law and possessing a truly representative government enjoy a right to territorial integrity.

The self-determination of people indeed coexists with this other principle of territorial integrity of states, which is at the base of today’s international system. That a state’s territorial integrity is inviolable is at the base of the international society, for obvious reasons.
It is right to say that the realization of a right to self-determination should not entail the division or violation of territorial integrity and political unity of a sovereign and independent state. One has only to look at Chapter VII of Resolution 2625 and the Helsinki Final Act of 1975 to realize this: indeed all those instruments state that nothing in their wording must be interpreted as going against the integrity of the world’s states. Hence, only those secessions which have been approved by the central government are indeed accepted as legal by the international community: for example Montenegro’s and South Sudan’s independence have not been controversial.
Things are completely different with unilateral secessions are indeed regarded as dangerous and illegal by the majority of the international community and very few of them have been successful: Kosovo is still not recognised by the majority of the international community, while Georgia’s breakaway republics have been recognised only be a few countries.

From all of this it’s clear that Catalan secessionists would have a hard time if their dream of secession was to become true. With the central government not agreeing at any discussion of Spain’s unity, the separation of Catalonia would have to be unilateral and consequently illegal.
It will be illegal because the body of law on self-determination and the right to secession is very clear on its defence of the states’ territorial integrity when possible.
Of course there exists what has been termed as “remedial right” to secession, which peoples have when the state openly disrespect their rights and all other means of negotiation have failed. However this is not the case in Spain, where Catalans have right to a special regime of autonomy.
Finally the situation can be best summarized by quoting Judge Yusuf of the International Court of Justice when he said that there is no right of unilateral secession simply because a racially or ethnic distinct group wishes to do so.

Nick Clegg: No apologies, no suckers I’m not sorry…

Nick Clegg: No apologies, no suckers I'm not sorry...