Immigration, a very important issue for many in the UK right now. It has divided communities and created tension between parties and communities nation wide, but is mass immigration a lie? Are the negative affects and the claims of a lack of space just myth?

In the next week 2 of our great young writers will be debating on this issue, starting with Anonymous: 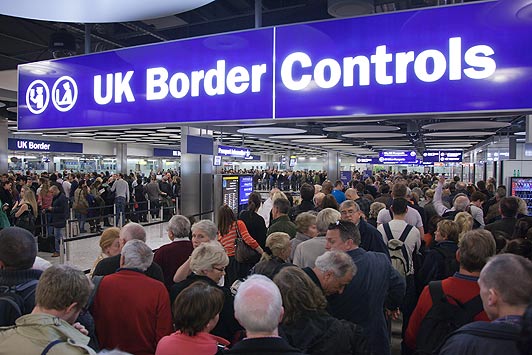 Are you someone who baulks at the idea that one in four UK babies are born to foreign mothers? What about if I told you that this costs the taxpayer £30 million a year in NHS bills? Or if at current rates of net immigration, Nicholas Soames, a senior conservative MP, estimates we will need to build “the equivalent of eight of the largest cities outside London” over the next 15 years in order to accommodate them. Worrying?

I am apparently, very much in the minority here- as of 2009 81% of the public thought immigration should be brought under control. But here is my defence of immigration.

Firstly, hostile reactions towards immigrants usually reach their most pustulant when they imagine that the NHS is being relentlessly exhausted by insurgencies of migrants, quoting some £300 million in ‘health care tourism’, 10% of which is the £30 million for foreign births. True, but in 2011/12 the NHS has a budget of around £106 billion. Then equate that in the ten years leading up to 2006, the government estimated that immigration raised production by 0.15% per annum. Do the math. These matters are hardly crippling the NHS. But what are crippling the NHS are PFIs, which will cost the taxpayer some £300 billion in the next five years (these 717 schemes only have a capital value of £54.7 billion!), cuts to services so that these PFI debts can be repaid and an inflated managerial class. The economic strain of immigration is complete mythology. So often I hear “we cant afford them” or “they’re a burden on the system”, but really we should be looking up at those who govern and not down at those making use of the finest testament to socialism this country has. Attacking the rights of legitimate UK residents (recent or not) to use the NHS goes against its founding principle that free health care should be available to all.
National debt, private ownership, bit like socially detached wealthy individuals (brings into supposedly detahced communites)
Secondly, if you add up the population of Soames’ eight largest cities in the UK, you get a figure of 3.4 million, which if taken as a percentage of the current population is roughly 5.5%. Couple this with the fact that currently 93% of the UK is not urban and only 2.27% is built on, some quick maths and reason (5.5% of 7%) will tell you that a 5.5% increase in population would increase urbanisation by… 0.385%. So if you look past the scaremongering, you find immigration will do next to nothing in affecting the urban landscape over the next 15 years. If immigration is anything like it is in the mind of those who fear it so much, even if net immigration were seven million over the next fifteen years you would still see less than 1% more urban areas.
So if the economic and spatial arguments can so easily be broken down, what are you left with? Well, why does someone baulk at one in four children being born to foreign mothers? Do they fear some kind of cultural invasion, that the British way is being lost?
Whilst one in four way seem an alarming figure, with the majority being of Polish descent, critics fail to realise several things. Firstly, that the general population of Britain as it is, is already a completely diverse and functional mixture of races and religions.

My younger brother has a Jamaican father and a mother with two Irish parents. One of my Dad’s best friends is a Polish man he employed in 2006, a fiercely loyal man who works tirelessly with my father to keep his plastering business going. Many of us are descendants of immigration, even those who claim to be Anglo-Saxon, and so to decry immigration now, when it’s societal impacts can be shown on mass to not be a detriment to society, is hypocritical and ignorant of the way societies evolve.

Nick Clegg: No apologies, no suckers I'm not sorry...