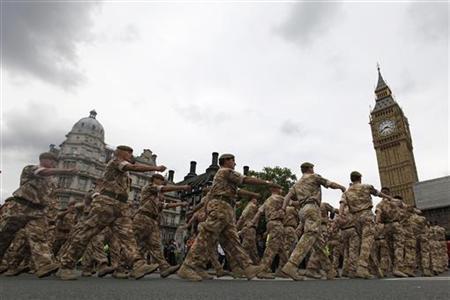 In the last months David Cameron issued plans to implement the British Army should Trade Union go ahead with a general strike. Cameron stated that if public service members go with a general strike he would have to fill the gap. After the major success of the armed forces being used as a security back up for the Olympics the prime minister knows it is definitely a viable option for his cabinet to use.

The government warned that the trade unions plan was a ‘threat to the economy’; should the strike go ahead it will be the first of its kind since 1926. The last general strike saw miners lead the way in trying to force the government to guarantee that wage and working conditions would not worsen. The strike lasted 9 days and failed to bring about any sort of guarantees for the public sector workers. That general strike saw middle class volunteers step in to fill the workers gap; this time round it could well be the military.

The country will remember the strikes back in March that lead many fuel truck drivers to abstain from working, causing a major fuel panic which ultimately was not helped by the Cabinet office minister, Francis Maude, who was quoted as saying ‘As and when it makes sense, a bit of extra fuel in a jerry can is a sensible precaution to take.’ Needless to say this caused many drivers to rush out and buy as much petrol as they could before shortages hit them and prices were inevitably hiked.

The public will also remember many military personnel stepping in, back in March, showing their ever-growing aptitude for public services, but can Cameron keep on using the army as a stop-gap? Many believe it to be foolish to keep relying on the armed forces to step in, especially after the government decided to cut military funding and thus laying off numerous people. This idea that the forces should do more with less is something that understandably does not sit well. Keeping the country ticking over with fuel back in March before stepping up to the mark for the Olympics and now providing public services in the wake of a possible general strike involves a lot a extra work.

So is Cameron right for doing this? Is the military really a viable option? Well it must be looked at in another way: does he really have a choice? For a conservative government to back down to Trade Unions is a big no-go so Cameron may feel that he does not have a choice in the matter. Being the prime minister who thrives on public backing such as himself, it is a difficult situation. It is not whether Cameron is doing the right or wrong thing. He is doing what he has to do, especially after this year which has seen a number of publications state that he may be too weak to run the country, whether due to his struggle for power over the party with Boris Johnson or his unwillingness to do a major cabinet reshuffle.

Ultimately Cameron must bring in the armed forces in the gap left by the Union. This is not only to keep control over his party but also to keep the country from falling into even more disrepair.