A Students take on EBACCs 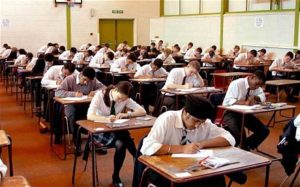 After what feels like an age of leaks, internal Coalition wrangling and policy reverses, British education secretary Michael Gove has unveiled the successor to the GCSE qualification for 16-year-olds, the English Baccalaureate Certificate (or ‘EBacc’). We were promised a return to an O-Level style examination system, “rigorous” testing and more “traditional” teaching. Is that what we are getting? Yes and no. Is it an improvement? Few would say so.

EBaccs are the creation of a minister inflicting reform for the purposes of headline grabbing, rather than a rational assessment of the changes that would be needed to improve the exams system. Gove has made great play of the fact that his exams will be harder, but has neglected to explain how less-able students will get their ability recognised. GCSEs offered a tier system, under which such students could take a paper targeted at them, which would provide a limited grade in exchange. Crucially, all students could gain a C grade (commonly regarded as a “pass”). EBaccs will be a one-tier set of exams, which can be taken from ages 16-18 according to ability. Does delayed teaching really solve this?

Another change will be the reversion from modular examination to one end-of-course, three hour examination. Two years of intensive learning will be assessed in less time than it takes to watch ‘Gone with the Wind’. I doubt that this reflects the natural pattern of learning, or indeed conditions that we will experience at any point after secondary education; A-Levels are still modular, as are university degrees and as are many professional exams. It seems absurd to create this artificial distortion now. I should declare an interest here: I am taking my Maths GCSE early, and have obtained A* mark in two of the three modules. GCSEs I am starting now will be subject to the one exam rule. That said, the flaws in testing over a single day must be apparent. Aside from the individual circumstances and problems that could arise, the pressure will be intense; college places are at stake.

I do not agree with allegations that all GCSEs are too easy and there are entirely new concepts that we must now master at a younger age compared to when elder peers sat these exams. Crucially, these topics have been included for the sake of better teaching, whereas some EBacc topics are a throwback to times long past. Calculus is not a skill that is widely needed any more, so there is little reason to teach it, and yet it will be included. Surely teaching should be relevant to today’s world and not to the nostalgia of a populist minister.

It is those who have entered secondary education this year who will be the first to take EBaccs. They will probably find them even more taxing than their predecessors found their exams. But they will not be smarter. These exams have been deigned to make students recite facts, with much less emphasis on applying this knowledge. And when people memorise facts for an event, they will forget them shortly after.

Some of the reforms are for the better, however. The franchising of specific subject exams to single exam boards is a measure that is long overdue. It eliminates the upwards pressure on grades whilst avoiding the dangers of inefficiency and expense that could accompany an outright monopoly. Additionally, the new grading rules are a guarantee against grade inflation, real or alleged. Candidates will be graded from 1 to 6, with 1 being the top grade, and a no more than 10% of candidates will receive Grade 1. This will mean that borderline students may receive Grade 2 one year, but Grade 1 had they taken it another. This is not too unfair, as generally a student’s grades will only be compared to those of students the same age, especially when applying for colleges. Nevertheless, these improvements are small comforts compared to the massive drawbacks of the English Baccalaureate certificate.

Overall, EBaccs are a large step backwards for what is supposed to be a modern British education system. There is a reason that three hour end-of-course exams, calculus and single-tier exams have been abandoned, and that is because they are crude, unfair and out of date. The GCSE has served well for 34 years, and “if it ain’t broke, don’t fix it”.