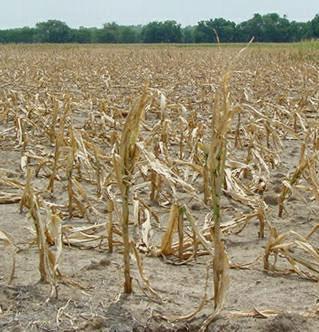 The result of the poor harvest this summer has the potential to have an unnerving effect on the world’s food market after the US, along with several the rest of the world’s largest exporters, has experienced a succession of torrid weather that many worry will seriously harm global food stockpiles.

Food shortage has been a growing worry over the last two months and the situation was made worse when the US Government announced last week that it was dramatically cutting its forecast on corn production by 17%. As a result, the US department of Agriculture calculated that corn output would reach just 10.8billion bushels for 2012-13 and the average yield will be only 123.4 bushels per acre, the lowest for 17 years.

As a result of the freefalling production figures, corn futures on the Chicago commodity exchange rocketed up to a massive $8.30 per bushel, seeing a 60% increase over the last two months.

Not only has the quantity from the harvests suffered, but harvesters have also struggled to find solace in the crops that they have remaining. In what has been the worst draught in over 50 years, a massive 50% of the entire country’s harvest has been rated down from poor to very poor.

However, the problem stretches much further back than two months ago. The National Oceanic and Atmospheric Administration (NOAA) says that the last 7 months have been the warmest on record and July experienced temperatures never before experienced, out-doing the record temperatures set in the ‘Dust Bowl’ period during the 1930’s.

Most worrying of all, however, is that with food shortage becoming prominent in the US many fear that this could cause frightening collateral damage to the entire food market and have a particularly adverse effect on many countries that rely heavily on importing the produce of countries like the US, especially developing countries that struggle both agriculturally and financially.

This also follows problems that have arisen in Brazil, where heavy rain has recently hurt their production of sugar cane, for which they are the world’s largest exporter, and poor weather in Kenya has seen the price of tea reach a 2-and-a-half year high, with the price of cocoa set to rise as well.

Shenggan Fan, Leader for an agricultural programme being run by the World Bank, said that “Several urgent actions must be taken to prevent a potential food crisis”.

He, like many other economists, worries that the sudden inflation of food prices might not only see export bans being considered by the world’s main producers, but might see importing countries starting to buy in the expectation of the problem getting worse over the next few months in an attempt to get what they can before certain produce start to become too exclusive, whether that be due to prices or limits on amounts being exported. This is something that, naturally, developing countries and other nations that rely heavily upon importing their food will fear, as they are unlikely to be able to meet the rising costs either way.

Hannah Stoddart, Oxfam’s head of economic justice policy, highlights the idea that developing countries face the prospect of receiving a double blow from the problem: “The combination of rising prices and forecast low reserves means the world is facing a double danger. As usual, people in developing countries will be hit hardest, with millions who are currently ‘just getting by’ starting to go hungry”.

In response to the lurking threat of worldwide food shortages, Shenggan Fan added to his earlier comments that countries should reduce the amount of produce put towards creating biofuels so as to increase the stockpiles needed to feed the world.

This is an idea that was also shared by the director general of the UN’s food and agricultural organisation, Jose Graziano da Silva, who in fact wants to see a complete halt in ethanol production so as to make sure that any production goes toward feeding people. He said: “An immediate, temporary suspension of that mandate would give some respite to the market and allow more of the crop to be channelled towards food and feed uses”.

At this moment in time pressure really is going to mount on our planet’s largest producers to be decisive and come up with something that will make the most of what they have left of their stock as it is slowly depleted. The most effective method at this time seems to be to tip the balance slightly between the use of produce for ethanol production and for feed usage in favour of the latter. This would at least offer some further global stock so that even if, as some predict, countries resort to panic-buying in the expectation of prices increasing further, it might at least keep the world food market and its figures on an even keel temporarily. However, as the foundations of the global food market, unfortunately the likes of the US can do nothing but pray for their luck to change, and hope that these problems cease before the potential for a world food crisis becomes a reality.