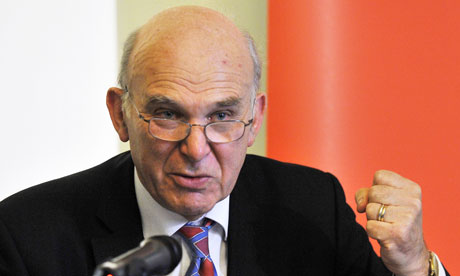 Business secretary Vince Cable has announced that the government is to set up a new bank, using up to £1 billion of the taxpayers’ money to help small and medium sized businesses.
Mr Cable wants to encourage entrepreneurs to “make things” rather than basing the economy on the mirage of “property speculation and financial gambling”.
He claims the business bank will be a “lasting monument” underlining the need for fundamental reform of the banking system in the wake of the credit crisis.
“We need a new British business bank with a clean balance sheet and an ability to expand lending rapidly to the manufacturers, exporters and high-growth companies that power our economy,” Mr Cable said.
“Today I can announce we will have one. I am working with the Chancellor to develop a new institution that will combine £1 billion of new Government capital with a larger private sector contribution.
The bank will not have branches in the high street and will act as a wholesale institution. It will aim to make loans to small- and medium-sized enterprises through innovations such as peer-to-peer lending, run by companies such as Zopa, in which individuals bypass traditional banks to lend to each other.
But what are the implications of this, a nationalised bank? And to what extent is it going to help small and medium-sized businesses?
First of all, Vince Cable is trying to resurrect the ‘broken British banking system’ which still remains one of the biggest obstacles in the way of economic stability in the UK. And by Cable attempting to nationalise the banking system, it ultimately shows the fears that the government still has about small businesses being able to lend money for growth.
And if companies are still struggling to borrow, it doesn’t just matter because it puts jobs at risk and delays Britain’s recovery in the short-term, but because the kind of adjustment the economy must make – from finance to industry, domestic consumption to exports – requires a radical transfer of resources.
All the suggestions are that, the Green Investment Bank, the new institution will be edged in by tight financial restrictions imposed by a nervous Treasury that believes governments should not be in banking.
But a new report by the Institute of Public Policy Research (IPPR), due to be published later this week, suggests that £40bn would be the minimum size worth bothering with if the new bank is to make a serious difference to the economy, and urges Osborne to allow it to raise funds on capital markets to boost its lending power to £100bn.
Like Cable, the IPPR’s Tony Dolphin sees the bank as a solution to some of Britain’s long-term economic problems, rather than a rapid cure for the slump. It could help to boost investment levels, for example, which are far too low in the UK relative to our international rivals, at just 15% of GDP. A state-backed bank could also take a more long-sighted approach than small firms are accustomed to seeing from high street lenders, with their computerised loan models and centralised management.
Mr Cable hopes to back British companies in industries such as vehicles, aero spaces, life sciences, creative industries and universities, in order for them to expand their businesses, therefore putting more, much needed money into a stuttering economy.
Ultimately, the plan is a long term solution, with the aim of small businesses being able to take out longer, ten year loans, something which businesses struggle to get out of the main high street banks.
BY: Peter Leatherbarrow.

Sino - US Relations: The Big Block