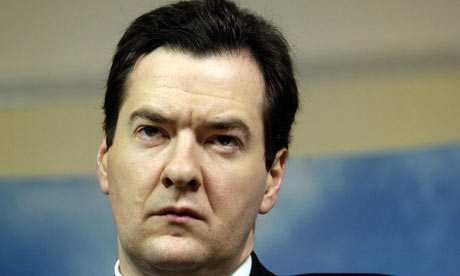 George Osborne would like to have us believe that instead of going to work first thing in the morning we should all be looting- blazing pitchforks in hand- any homes where the curtains are still drawn, demanding to know why the inhabitants aren’t at work. It seems George has never come across the concept of working night shifts- but he can’t know everything, can he? Just as your English teacher said ‘write about what you know’, Osborne seems to deliver economic policies about the small section of society he knows.

Don’t worry, I’m not planning to write a ‘Casual Vacancy’ spin-off series and bore you all with one-sided socialism. And it might seem silly to read into one comment Mr Osborne made this morning during a radio interview. But Osborne’s comment about drawn curtains suggests that he is still working from an outdated crib-book entitled ‘How to recognise different social classes’.

Osborne’s welfare cuts are designed, he says, to prevent people who feel they’re hard-done-by from stock-piling benefits that ought to be given to people who actually are hard-done-by. From personal experience, I can tell you that it is relatively easy to make any minor physical disability sound life-changing just to get an extra fifty quid a week. I know several university students who- perfectly legally, but somewhat immorally in my opinion- cheat the system so that they get a bigger student loan. I think this is very unfair, of course I do. But the experiences I’ve had have taught me that benefits cheats are a socially mobile group.

It isn’t that long ago that we believed in Britain that poverty was the result of a weakness of character. Although he daren’t say it explicitly, Osborne’s comment about benefits cheats having a lie in every day shows that still views society as a collection of stereotypes. If he really wants to make society fairer, he needs to understand that the national sense of entitlement has become epidemic. It might have started with the chavs, but its inexorable spread (apparently there were some monkeys involved somewhere along the line) has left us in a society rife with it. Political efforts to find the cure have so far been unsuccessful, simply resulting in violent protests and resentment. Maybe it’s time for politicians to realise that they need to invest a bit more time in researching their vaccine before they hail it as the miracle cure it to the rest of us.

Osborne doesn’t seem to have grasped that the national sense of entitlement doesn’t just affect rioting teens who ‘know their rights’: in the age of Twitter and Facebook, everyone has an arena to express themselves in. We’ve adapted to this increased access to expressive platforms by feeling that we all have the right to tell everyone our toast-eating habits free of censorship.

Everyone feels it’s their human ‘right’ to blurt out their opinions, whether or not they’ve properly thought about them, and usually without recourse to any form of evidence.

It used to be that only people with an opinion worth listening to was invited to express it publicly, but now everyone and anyone can tell the nation exactly what they’re thinking. This sense of entitlement has broken down the respect we once had for authorities, and whilst I don’t want to return to an intellectually hierarchal society, I am concerned about the effects of this sense of expressive entitlement. I believe it is this that led someone to deface a much-loved work of art in a revered art gallery this weekend. The culprit wanted to express the artistic movement of ‘yellowism’. In protest, I fully intend not to give his movement any more attention. Treat others as you would be treated, goes the old saying, and the disrespect that the vandal showed to the hours of work Rothko must have put into creating his mural demonstrates that he believes that his right to express himself is more important than Rothko’s right for his work to be respected. Rothko wanted the room in which the mural was displayed to be spiritual, and now his right to express himself has been violated.

Social media has turned us all into attention seekers, and we live in an era where any publicity is good publicity, so chances are there will be a ‘yellowist’ wedding on the cover of ‘Hello’ before the year’s out.