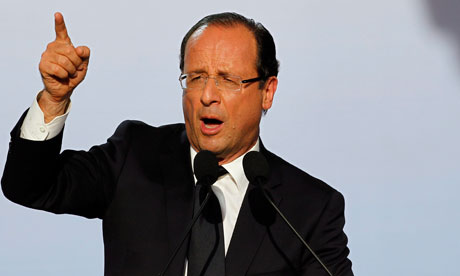 Francois Hollande’s rise to become French president and remove the centre-right administration of Nicolas Sarkozy was a big moment for Europe. Hollande’s accession marked the rejection of technocratic and conservative led recession in favour of a more equal, painless route out of Europe’s woes. Furthermore, Hollande’s triumph appeared to personify the anti-austerity tide sweeping across Europe from the streets of Athens, Dublin, London and Paris. The French elections symbolised the democratic wishes of the peoples of Europe to escape the bonds of austerity in favour of a growth-led recovery in the interests of the many not the few.

The initial triumph for Ed Miliband’s party therefore was simply the impending signs of a turning tide. The people of Europe had realised that it was leftist, growth supportive policies that would drive Europe out of recession not more and more cuts to vital services which starved the economy of oxygen. Hollande gave British Labour supporters a huge boost with his election, even if we have found his early days in office underwhelming. That is, we have until four days ago when Hollande unveiled his first budget, including his centrepiece policy: a super tax on the super-rich. From now on, the richest in French society will pay a tax rate of 75%. Whilst Ed Miliband has done some marvellous work in raising Labour’s ratings in the polls (even if his own are rather less satisfactory), it will be the results of Hollande’s super tax that could define whether Labour can be trusted with the British economy in 2015.

Ed Miliband has long been making moves against what he sees as predatory capitalists and the super-rich. Recently he announced plans to forcibly break up banks if they refused to do so themselves, whilst attacking the Tories’ watering-down of the Vicker’s report into banking practice. Furthermore, he has dedicated Labour to repealing the tax cut for the rich, which the Tories implemented in George Osborne’s budget, in the interest of fairness and to squeeze those who contributed to the financial crisis that has led to Britain’s terribly recessive economic period. These policies are controversial to say the least.

Whilst the public generally agree with Ed on the need to make Britain a more egalitarian and fair society, they fear that Labour, still blamed for the financial collapse of 2008, cannot be trusted with the economy. These fears are compounded by the Tories, although their economic credibility is dissolving gradually due to the double-dip recession. Another Tory argument, central to the idea of taxing the rich and squeezing the banks, is that if we squeeze the rich too hard they will simply pack up and leave, simply go on strike, in a scene reminiscent of one of Ayn Rand’s sauciest wet dreams. This is why Hollande will be key to Labour’s election chances.

Although the French economy is not based around a rich financial centre such as the City of London, the French nation has its fair share of the super-rich, people who will presumably become disgruntled by the notion of having their taxes raised to 75%. The key tests for the Labour party will be the tax receipts of the French treasury over the next couple of years and the number of rich who decide to leave French shores in search of a more generous tax deal.

The Tory argument that a Labour government will push away the banks, the rich and their enterprises by squeezing them too hard is about to be tested across the Channel and if their arguments are proved wrong not only will the Tories look even less economically credible but they will suffer further humiliation. Furthermore, if Labour are right, Ed Miliband will once again be proved right on one of his main themes (remember Murdoch and the Leveson Inquiry). This would be a major boost to Miliband personally and Labour economic policy and credibility as a whole. The success of French policy could cement Labour’s chances of re-election and consign the Tories to a swift return to opposition. The advantage for Miliband is that, even if he is wrong, the consequences for him are much less severe.

Firstly, Miliband can still take the moral high ground. He would remain the politician who was backing the little people over the rich and powerful. He would still be the one standing up to the banks and their gambling practices. Plus he would still be right to demand the morally and ethically correct route even in the face of a wealth rebellion. After all, even if the wealthy threaten to leave, that would not make it right to simply cave in to their demands. Miliband cannot let himself be seen selling his ethics away for the concern of money. The public will understand and appreciate this.

However, I really do not see it going that far. The rich will not leave France on their yachts and private jets. Instead, the French people will be seen to be enjoying a fairer deal, where the rich pay their way and the poor are not used as sponges to be wrung dry so as to pay for a tax cut for the rich. Hollande may just have provided a huge boost to the British Labour Party’s chances of victory.