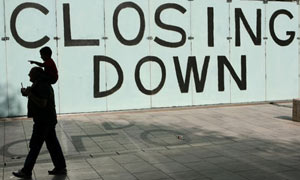 In the 3rd quarter of 2012, Britain finally clambered out of its double-dip recession. It not only did that, but achieved GDP growth of 1.0%, the fastest the country has seen since 2007. In light of how much pain the British public have seen due to the nation’s poor economic performance, the ever-unpopular government might have expected the news to be widely celebrated. It wasn’t. As soon as the figures were released, experts began to urge caution regarding the figures. As much as 0.6% out of the 1% figure could have been accounted for by businesses making up for productivity lost during the Jubilee and the Olympic games. The United States’ economy grew by 2% over the same period, a sign that stimulus is working and austerity isn’t. The construction sector had declined by an alarming 2.5%, suggesting that a “triple-dip” recession is a real possibility.

In fact, the only group conspicuous by their lack of gloom is the opposition Labour Party. They remained largely silent on the matter, apparently planning to see if the situation develops into a sustained recovery or if the economy falters once more before passing judgment. It was pointed out that, on the same day is the figures were announced, the car manufacturer Ford announced that it would move 1,000 production jobs from Britain to Turkey. The prospect of a jobless recovery has been raised.

In fact, it is clear why few are celebrating these growth figures: the GDP figure has ever less relevance to the living standards of the working and middle classes. Wages have been falling in real terms since 2008; food, energy, transport and housing costs have been rising; public services are enduring deep cuts; and there is no prospect of economic growth changing any of these trends.

This is because the economy is now structured in such a way that ever less wealth filters down to the workforce, and it is instead concentrated in the hands of businesses and the shareholding elite. A simple measure of such income inequality is the Gini coefficient. The calculation of it would be difficult to outline, but the figures can be easily understood. The higher it is, the greater income equality exists within a population, with 0 representing total equality, and 1 representing perfect inequality (when a single individual holds all the wealth). It rose steadily in the UK from 0.24 in 1979 to over 0.37 today- similar to those seen in Victorian times. Another way of looking at it is that the bottom 10% of earners hold 1% of the nation’s wealth, compared with 31% held by the top 10% of earners.
The arguments surrounding the problems around inequality are well known, and do not need repeating now. However, it is worth noting that an economic system which fails to deliver a better quality of life to its workforce is seldom one which survives for very long. As in the 1930s and 1970s, a radical revision of our priorities looks likely. The electorate, and the political classes that are supposedly there to serve them, are beginning to ask if there is an alternative to passive government, rising poverty, and a flawed employment market.

Ed Miliband, the Labour leader, attracted much criticism a couple of months ago when he talked of “predistribution”. The concept is a sound one: the state intervening to ensure that employers raise income of their low-paid so that their incomes do not have to be topped-up with tax credits and other benefits. The private sector is currently receiving implicit subsidy from the Government by its sustaining of artificially low wage rates. Instead of higher taxation of profits to fund said subsidy, employers would directly cover labour costs, and benefit from lower taxation in return.

Once the link is restored between the interests of employers and their employees, when we’re genuinely “all in this together”, we’ll find that good GDP figures will be of more benefit to the man on the street than they are now. But while the division between the 99% and 1% becomes ever more entrenched and ever more potent, it is impossible to say that our economy is benefiting the hard-working majority.

Georgian Elections and the Rise of Electoral Authoritarianism