Selling to the enemy? 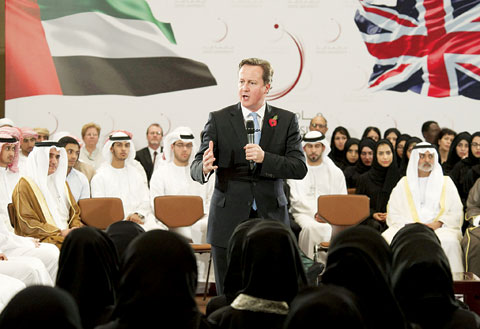 We were all happily focused on the election of a man with surprisingly little real power to a big white house while David Cameron made his rounds in the Arabian Gulf, visiting whatever autocracy he thought might part with some oil money for a few tornado jets.

I remember being shocked as a youngster, when on an antiwar rally I saw a man holding a placard saying Britain and America sold Saddam his weapons, but as we keep making very obvious mistakes these facts are becoming less and less shocking.

These Gulf kingdoms are unsustainable, its an obvious fact, they rely heavily on the stability that is brought by the oil money. But the oil will run dry, another obvious fact, and as the economic growth increases the domestic need for fuel the day grows nearer when they won’t have enough to export as well as satisfy domestic demand. Even now, with the affluence, a large portion of the population see very little of it. The Gulf nationals are coddled with cushy state subsidized jobs but that is stagnating real economic productivity, we all know that these countries are built on the backs of South Asian slave labourers anyway.

It’s already not going well, Bahrain is the obvious example. Lets note that it was Saudi and the UAE who sent troops to help suppress legitimate demands for democratic reform in Bahrain. Saudi who quietly quashed a shia uprising during the Arab Spring, the UAE who recently jailed 64 political activists who asked for democratic reforms. The calls in these countries are not fading, they are growing. As the state hand outs start falling short too, the only thing we are going to see is a more-selfish spring; breeding the culture of entitlement will only bring these regimes down in the end and be sure to look out for Tornado Jets flying over the poorer emirates when it happens.

What, say, is the difference then between Russia wanting to sell arms to Assad in Syria? Why would it be wrong for Mr Cameron not to condemn these actions? There are two points he made that make you wonder. Firstly, he said that countries have a right to self defence – sure thing, what he really means is that the Gulf states will definitely take our side against the Iranians, the Arabian Gulf states and Iran have a notoriously antagonistic relationship, its really the only place that poses them any kind of threat. Also, the choice of words is maybe slightly wrong, if we change it to ‘regime’s have a right to self defence’ would he be so quick to applaud? Secondly, he made points about the economic importance to Britain of her defence industries, BAE systems for example (they make Tornado jets) employ quite a few people and bring in quite a bit of money, for a Prime Minister elected during a recession the economy is always the focus right? No. As surprising as it seems to be British jobs in no way equal Arab lives, exactly the same way that Russian jobs do not equal Syrian lives.

Hypocrisy is the only word for it – on both sides, Cameron and the Gulf leaders. There’s little denying that Iran can be seen as a legitimate threat but an arms parade around its closest enemies is only going to increase hostility. Lets please stop the underlying racism too, small changes to our economy are not more important than helping stop human rights abuses, however much the skyscrapers tend to overshadow them.