Science in the Dock in L’Aquila 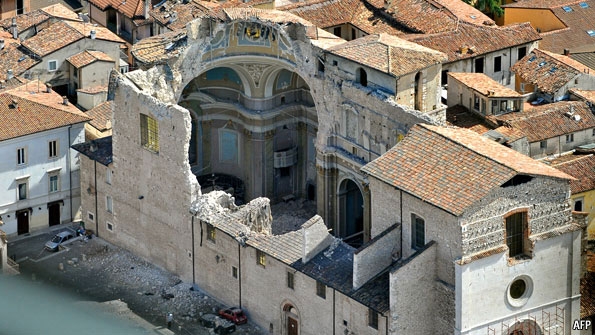 The deadliest tremor to hit Italy for over thirty years, the 5.8 Richter scale 2009 L’Aquila earthquake killed 309 people. And all because of the criminal optimism of six scientists and a former official – according to a court there. The decision has outraged the scientific community.

On the basis of fears that scientists will be dissuaded from giving advice that includes any element of doubt, the Italian court faces united opposition. Professor Luciano Maiani, the head of the Major Risks Commission, resigned to make this point.

However the prosecution’s case, rather fittingly, seems either to be confused or to have been misrepresented. They say they understand the near impossibility of predicting earthquakes. The conviction was for the misleadingly optimistic message communicated to the residents of L’Aquila rather than having failed to predict the earthquake.

Six days before the main earthquake, amid seismic swarms (low-level tremors), the Major Risks Committee met to advise the Civil Protection Agency on the likelihood of a serious earthquake. Bernardo de Bernardinis, deputy technical head of the Civil Protection Agency, told a reporter afterwards that ‘the scientific community tells us there is no danger, because there is an on-going discharge of energy. The situation looks favourable.’ This statement, as is attested in numerous reports, was the crucial factor in people’s fatal decision not to sleep in their cars.

de Bernadinis, according to the US-based journal Nature, was mistaken: ‘The minutes of the 31 March meeting, though, reveal that at no point did any of the scientists say that there was “no danger” of a big quake.’ Yet this does not let the scientists entirely off the hook in the eyes of New Scientist, a popular British magazine. In the face of de Bernadinis’s ‘grossly inaccurate’ statement, ‘the seismologists should have stepped in.’

They do have a point. If they were aware that their advice was being misrepresented, the six scientists ought to have corrected the official. As policy is increasingly informed by scientists, they need to be more aware of the direct consequences of their work and ensure that they are understood clearly. In this case that means ‘stepping in’.

Politicians, civil servants and other officials must also be literate in science, both in terms of understanding the technical aspects of the content and of their implications for policy. This allows them to translate percentages into action. So the 5% chance that a major earthquake would follow the seismic swarms would provoke action – or at least the explanation that a serious earthquake was a possibility*.

So this will be the main significance of the case. The decision will be appealed, and will almost certainly be overturned – although I wouldn’t want to rule out a 5% chance of an unsuccessful appeal. In the long-run the message will mostly be that scientists must ensure they are understood and that politicians must understand the evidence and its context.

But it is not so simple. It is not unheard of for experts to be cowed by single-minded politicians. In the UK science and politics have been at odds over BSE and the safety of cannabis. In this case there are questions over Guido Bertolaso’s involvement. Bertolaso was de Bernadinis’s boss at the time, and closely associated with Berlusconi.

Known for generally sorting things out, he launched a legal case against Giampaolo Giuliani, a local scientist who had, a month before the main tremor, predicted it with the aid of radon emissions. Indeed, a phone tap has Bertolaso describing the 31 March meeting as a ‘media event’ designed to ‘quieten imbeciles’ believing the local scientist’s prediction. This has only been noticeably reported in this article and relies on a little imagination by the reader, but the hints at bad practice are worth following.

The case highlights a shift in science. It is not a medieval witch-hunt (though holding the trial in L’Aquila can’t have helped) and there is not much of a legal question here – the seven convicted all acted in good faith. But it might make some scientists more cautious for fear of being wrong, and others more outspoken for fear of their science being stifled. Either way, the days of the cloistered professor are over.