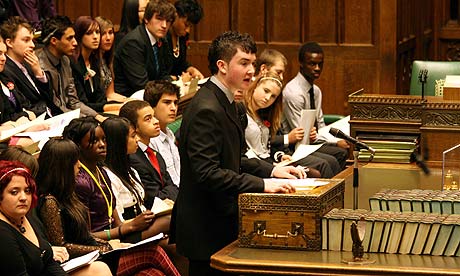 The national curriculum should be overhauled to include wider life skills including political knowledge, better sex and relationships education and cultural awareness, according to the UK Youth Parliament which has chosen ‘a curriculum to prepare us for life’ as its campaign for the coming year.

The motion was one of five debated by the UK Youth Parliament in the House of Commons chamber on Friday 23 November chaired by the Speaker Rt Hon John Bercow MP, and received 154 of the 295 votes cast.

The four other motions debated by young people in the chamber were: An Equal National Minimum Wage for All (50 votes), Getting Ready for Work (46 votes), Make Public Transport Cheaper, Better and Accessible for All (23 votes) and Marriage for All (22 votes).

A total of 307 Members of Youth Parliament aged 11-18 took part in the debates, the subjects for which were voted for by over 250,000 young people across the UK.

Children’s Minister Edward Timpson MP who attended the debate said: “We’ve had energy, eloquence and passion in abundance. You’ve tested and challenged my views and values and those of all around you. I would challenge anyone here today or watching elsewhere to leave without feeling seriously impressed.”

The young person who introduced the winning debate, Sumaiya Karim MYP, 16, from Wokingham, said: “This is something I feel really passionate about. I think it’s really important we address this, and it’s the perfect time to do it.

“It’s really important we have access to education and diverse cultures have the same opportunities. It’s about engaging young people and getting them involved in these issues and engaging them for later in life. A lot of our education makes us the people we are and we are the future.”

Chante Joseph MYP, 16, from Brent, is studying for the international baccalaureate because she felt the traditional English education routes weren’t for her and also spoke in favour of the debate. She said:

“When I was doing my GCSEs I felt really marginalised,” she said. “The education system doesn’t let you branch out. I was good at writing and speaking, but not multiple choice exams. It made me feel stupid and I’m not stupid. I don’t think any other young person should go through that.”

Ellie Nicholas MYP, from Yorkshire, said: “We need to look for something that’s going to help us achieve our ambitions. Not everyone has the same family background but we have a brilliant education system and it’s a way we can reach out to every young person in Britain, therefore a curriculum that prepares us for life is the best [motion].”

Arguing against the motion was Natasha Browne MYP, 17, from Solihull, who warned against the state prescribing these skills. “We are not designed to learn how to be human in an institution; we learn about life by living it,” she said.

“This country has one of the finest education systems in the world,” said Sumaiya introducing the debate. “From the ages of four to 16 we lead a reasonably comfortable life with a few bumps and hurdles. As we are lead through the education system, we are told what to do, how we must do it and then we reach the ages of 16-18 years old and we enter the ‘real world’. We gain the right to be paid the national minimum wage, we gain the right to have sex legally at 16, and we gain the right to vote at 18. We start working and socialising with people outside of the school and college gates. But what skills do we really possess to equip us for these important things in our lives?”