Racism in Football today: Will UEFA continue to paper over the cracks of their indecision? (PART TWO) 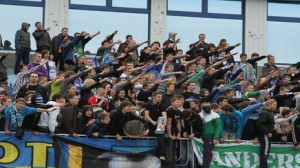 As I described in the previous instalment of this article, it is becoming ever more concerning that incidents of alleged racist abuse toward players, despite the vast amount of worldwide campaigns and supposed greater funding of these causes, remains not only extremely prevalent in the modern game across Europe, but has grown in countries, particularly in Eastern Europe, where cultural diversity is not very well recognised. Here in the UK, where we have different cultures that are recognised and accepted around our nation, we have become a population that now comes to accept those of differing ethnicity and religious backgrounds to our own.
The behaviour in question was covered in BBC Panorama’s documentary ‘Stadiums of Hate’, which was broadcasted only a week before the opening of the European Championships in Poland and Ukraine. It showed some quite unsettling footage of abuse toward players with African or Asian backgrounds, and gave a good insight into how this sort of behaviour is dealt with and punished in this part of Europe as well as unearthing some worrying flaws in the system:

Firstly, a player named Prince Okachi, a striker for Polish Premier League side Widzew FC, claims to have received torrents of racial abuse since joining the club. Then, when asked by the program’s reporter, Chris Rogers, if there was a governing body to which he could report the abuse, Okachi told Rogers that there was no such disciplinary body that could take his complaint, and the only person he could speak to was the referee, who “isn’t going to do anything”. Even before complaints can be made, there may not even be a system to tackle such issues, in a country that is part of a region in Europe that is frequently publicised for its racist attitude towards players of such origins

In Poland also, Judaism is widely hated and mocked by fans as a sign of being weak and inferior and a lot of fans have, remarkably, an admiration or even worship of the fascist Germany under Adolf Hitler. Indeed, at the majority of games in and around Poland, Ukraine, and the former Yugoslavia, you cannot visit a lot of games without seeing fans holding aloft a banner with the Swastika, or for seeing hundreds or thousands of fans, in unison, adopting the fascist salute of the Nazis. In the Panorama investigation, Rogers secretly filmed an interview with a Wisla Krakow fan at the Krakow derby between Wisla Krakow and Cracovia, where the Krakow fan stated that they insult Cracovia over how “the club was founded as a Jewish club”. Bearing in mind that these are people whose ancestors formed a large number of those killed under the Nazi regime it seems astonishing that they would now accept and adopt such an insult toward their own!

Some of the most disturbing footage in the documentary saw an attack on some fans at a game in Ukraine, where fans of Metallist Kharkiv, in one of the host cities for Euro 2012, started to attack members of their own crowd. It turned out that their victims were Asian students supporting the same team.

It would seem appropriate that, as David Cameron went on to say after the Danny Rose case, there should be stronger punishments for such behaviour, however UEFA has seemed to lack any real conviction in their action toward such abuse in recent years. The abuse England player Nedum Onuoha received in 2007 saw Serbian fans fined a flimsy £16,000. Rzeszow FC, a small team in Poland, earned themselves a fine of just £1,000 and a 2-match ban against a banner that said ‘Anti-Jew Front’ at a match back in April.

What is perhaps more unsettling is the fact that the heavy police presence at the majority of games in Eastern Europe seems not only to be blind to such activity, but actively ignore it and do nothing to combat it on match days!

Despite Polish football not being as lucrative as English football, fines such as this still do not seem like a strong enough deterrent for fans and clubs, especially on repeat offences. The majority of clubs in the world could afford such a fine and still have enough to fund everything else.

However, the one moment in the Panorama investigation that really got me was an interview with Colonel Volodymyr Kovrygin of the Kharkiv Police Force who, astonishingly, said that “there have never been any problems at football in the Ukraine, all the fans are very friendly”. Try telling that to the Asian fans who were attacked and received no assistance whilst they were punched repeatedly at the very same game. Secondly, after Rogers had witnessed the Kharkiv ‘Ultras’ performing the Nazi salute at the game, he questioned Kovrygin on this matter, who said “there weren’t saluting, there were just pointing at the players to attract attention to themselves”. Anyone who has seen the Panorama investigation, or has any knowledge of activity like this in football, may agree with me that such a response from a member of the ‘zero-tolerance’ Kharkiv Police Force is extremely suspicious. Is it possible to suggest that the almost comical dismissal of such actions by fans from the police force might show that the authorities in these countries may have their own personal agendas on issues like this? It would certainly explain why this sort of incident is in no way isolated.

Finally, the lack of conviction that UEFA have, with its embarrassingly low fines and a lack of urgency to address such matters, and what seems like poor co-operation with the footballing governing bodies in these countries to find the right methods to tackle racism has shown that the indecision and almost non-existent action allows such behaviour to continue. Euro 2012 may have been an overall success, but in the months that have followed it seems that this success may just dry out when the realisation that incidents such as that of Danny Rose are not being resolved dawns, and that methods to tackle such behaviour must be taken a level up if it is to be stamped out. Such abuse would not have gone unpunished in the UK and the same message must be translated over the whole continent to show that racism should not be tolerated on any level, regardless of nationality or background.

Should the British Police Carry Guns?

Should the British Police Carry Guns?