Protests and demonstrations- effective or a waste of time? 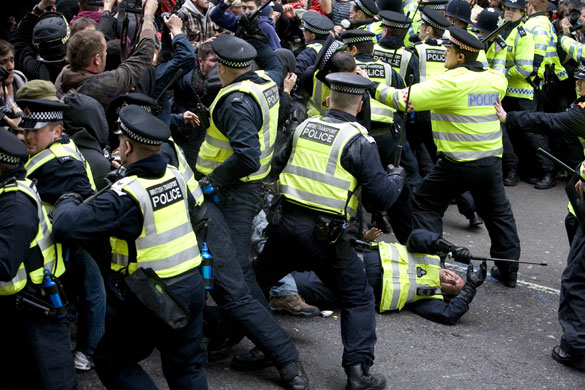 20th of October 2012 has seen one of the largest protests in recent years. Titled “A Future That Works”, around 150,000 students, activists, politicians and other members of the public filled the streets to voice their disapproval and anger at the public cuts, welfare budget cuts and against austerity measures put forward by the Coalition government. (http://www.unitetheunion.org/campaigns/_a_future_that_works__-_mass_t.aspx) Additionally the protest aimed to change the way politics works in Britain. The objective is to create a nation which pays workers a living wage, where bankers do not get high bonuses, where the government ensures the inequality between the rich and the poor is shrunk. http://afuturethatworks.org/why-we-are-marching/ These objectives are not new and throughout the years citizens have demonstrated against their government’s policies in hope of change. But does change ever come?

Undoubtedly some protests can have devastating effects on the governments. The Arab Spring of 2011 is a perfect example of small scale marches turning into full-blown revolutions which ended in regime change in Tunisia, Egypt, and Libya and currently in Syria. Protests have also had a positive impact in America where slavery and segregation were abolished thanks to the protests and among other things influential people like Malcolm X and Luther King. http://www.ushistory.org/more/timeline.htm Finally Gandhi had an innovative idea of protesting- peaceful non-violent civil disobedience which has led to the independence of India from the British Empire.

However, recently a large number of people have claimed that protests do not achieve anything. Almost a million marched against the war in Iraq in 2003, yet the march did not prevent the invasion. http://news.bbc.co.uk/1/hi/2765041.stm. Thousands of students marched against the rise in tuition fees, yet once again the results were unsuccessful. http://www.metro.co.uk/news/881195-arrests-made-as-students-march-in-london-against-higher-tuition-fees. One has to also ask what the Occupy Movement has achieved over the last year except some minimal TV coverage.

Ultimately, when examining history, it is obvious that protests and marches can have conflicting results- some achieve their aim, some do not. Perhaps one explanation for this could be the cause of the protests. While each reason for marches has a validity, one can argue that marching against authoritarian regimes and against slavery and segregation is far more important than marching against the tuition fee rise or austerity measures for example.  In addition, some of these causes which have been successful are quite objective. Anyone with any sense of morality would agree that racism, slavery and life under a dictatorship is wrong and thus it was inevitable that change would eventually come. Austerity measures, education cuts and even invasion of Iraq are less clear cut and can be viewed as rather subjective issues. Does that mean that less important matters should be left untouched by activists and protestors? Absolutely not. The secondary aim of marches is to illustrate the dissatisfaction of the citizens against a particular policy and additionally to spread the message among the public who may not be aware of what these policies are causing.  This is exactly what the protests against the invasion of Iraq, against tuition fee rise and the most recent austerity march has achieved- illustration of anger at the government and secondly, media coverage to attract more people to the cause. Let us also not forget that student demonstrations can be very effective. For example, thousands of students took over the university as part of the uprising of the Polytechnic University of Athens. As a result the military junta stormed the university gates using tanks. The outcome was the killing of many students by the dictatorship, however a few days later a nation-wide uprising took place against the junta. This demonstration has resulted in the creation of the famous legislation known as the Students Asylum or Academic asylum. This law was introduced to protect freedom of thought and expression on campuses in 1982, when memories of Greece’s repressive military dictatorships of the late 1960s and early 1970s were still raw. http://www.athensinfoguide.com/history/t9-97-7polytechnic.htm

So where does this leave modern day protests and marches. As the NUS is preparing for another demonstration on the 21st of November (http://www.guardian.co.uk/education/2012/jun/27/nus-demo-2012), one can only ask themselves whether it is just another waste or a vital action that may lead to positive results. From the examples given in this article it is clear that many marches do create change, regardless of whether it takes weeks or years. In addition as was already mentioned, these marches can achieve much more than transformation of the society. They can ensure the government is well aware that their citizens are not prepared to lay back and let the establishment make unpopular choices. Demonstrations keep the government on their toes and ensure politicians are always accountable for their actions. For these reasons, protest and demonstrations are vital ingredients of the political system and therefore have a vital role to play in our society.