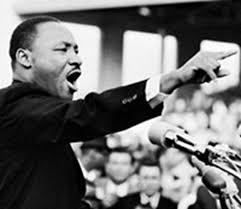 For such a star-studded and well-planned affair Obama’s inauguration has been a comedy of errors. A lot of attention has been given to Beyonce’s lipsynching with some Republicans even claiming over-optimistically that it invalidates Obama’s presidency. Another cock-up was when the rapper Lupe Fiasco was booked to play a celebration event and performed a thirty-minute anti-war song that includes the lyrics “Gaza strip was getting bombed Obama didn’t say shit, that’s why I didn’t vote for him, next time I won’t neither”[i]. For me though, the most shocking feature of his inauguration was that he had the audacity to use the bible of Martin Luther King Junior to what will likely be another Presidency of social injustice and imperialism.

This stunt was designed to place Obama squarely in the tradition of King and the civil rights activists. He seems to have gotten away with it too.  Photo-shopped images of Obama and King high-fiving have gone viral and the Jay-Z lyrics “Rosa Parks sat so Martin Luther could walk, Martin Luther walked so Barak Obama could run”[ii] are well known. But is Obama really what King marched for?  Are Americans really living out King’s famous dream? Obviously the answer is no. This is yet another example of elites trying to sanitise and dilute the legacy of radical figures and thus bring them into the conservative mainstream. Just as many British politicians will tell you that the suffragettes were a good thing but that their feminist fight ended with the freedom to vote, many American politicians will tell you that all King wanted was to end formal segregation between blacks and whites. If you accept this then the fact that a black man has gained the highest office in America is the final goal of King’s struggle.

However, this is a very selective reading his life’s work. It completely ignores both his economic and his anti-war views. King himself, when asked, why he spoke out against American imperialism instead of focussing on Civil Rights replied that those asking him these questions “have not really known me, my commitment or my calling”. He went on to call America “the greatest purveyor of violence in the world today” and to be guilty of “deadly Western arrogance”[iii]. So would he really support Obama’s  so-called “soldiers” guiding drones into Pakistani or Yemeni or Somali villages from a bunker in Nevada? Again, obviously not.

King’s economic arguments are also stubbornly ignored. Shortly before his death King set about organising what he called “a multiracial army of the poor” to march on Washington and, in a foreshadowing of the Occupy movement, camp there until Congress created an economic bill of rights. Many spokesman of Occupy Wall Street therefore understate their case when they say that “Martin Luther King would be an occupier”. In fact, to all intents and purposes, King was an occupier and a radical one too.

Just like Occupy Wall Street, King was persecuted by the establishment that now seeks to adopt him. Where Occupy were labelled domestic extremists, King’s organisation was labelled a black-nationalist hate group. Where Occupy was subjected to a joint major corporation and FBI crackdown[iv], King was wire-tapped and  his organisation attracted FBI instructions that “no opportunity should be missed to exploit, through counter-intelligence techniques, the organizational and personal conflicts of the leadership of the groups and to insure that the targeted group is disrupted, ridiculed and discredited”.

There is an African-American studies professor at Princeton called Cornel West who is a far truer inheritor of King’s legacy than Obama will ever be and he makes my argument far more passionately and eloquently than I can. I recommend you watch him speak here (http://www.youtube.com/watch?v=FBXb5oHXTv8) and next time someone mentions Martin Luther King tell them what he really thought and that he’s turning in his grave.