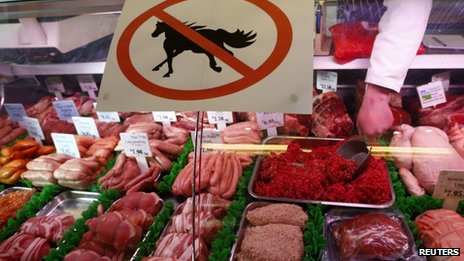 Apologies for the awfully cliché headline but it had to be done. The horse meat scandal is everywhere, it first started when traces were discovered in Tesco’ s beef burgers but that was just the start. Traces of horse meat are popping up everywhere. Yesterday the first fresh product was withdrawn from a supermarket – ASDA own brand beef bolognese sauce after numerous tests were returned positive for horse meat. The scandal has caused absolute outrage across the world and has now been labelled as a European problem. So what’s all the fuss about?

Many people feel that the situation has been unnecessarily escalated and that meat is meat. Vegetarians ask why eating horse meat is different to eating a cow? The problem is not that horse meat is being eaten, as it is eaten regularly in France, the problem is not even, as some have proposed,  that horses are humanised and that’s why it’s such an outrage, although I would have to disagree. The problem is false advertising, if I wanted to eat horse meat I would buy horse meat, if I buy a beef burger I expect it to be exactly that, if it is written in small print that it was 10% horse meat than that’s OK. Why is it OK? Well because if the public are presented with accurate information then they are fully within their rights to choose not to eat it. However when customers are deliberately misinformed this is where the problem starts and the anger starts to brew.

Another particular problem of horse meat itself is that horses in England are not bred to be eaten, so they are not regulated. The vaccinations that they receive are potentially extremely harmful for humans if they seep into the food chain. Some sceptics of the scandal argued previously that not knowing what is in your food is the price to be paid if you buy cheap meat. Although this assumption has recently been proved wrong with top of the range food retailer Waitrose beef meatballs being found to contain traces of pork, a fact that they failed to notify regulators of for two weeks after discovery.

OK so the horse meat scandal isn’t the biggest issue in Europe right now, nor will it change our lives but it’s important that food standards agencies take responsibility and carry out a much stricter regulation process. As I wrote this I read a tweet on my timeline that said ‘Does anyone actually care about this horse meat thing?’. Quite simply not everybody does, but everybody should know that unless you possess, kill and cook your own cows and then you might not know exactly what goes into your beef burgers. This ownership is highly doubtful, so be careful and please quit horsing around!