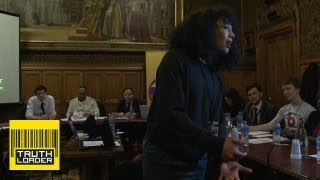 The youth have spoken, or so it sounded like on the 25th of March when Bite the Ballot and the Youth Media Agency collaborated to create an incredible event on the recent Leveson inquiry into the Media. The trade mark style of Bite the Ballot came through with a ground breaking and very touching poem at the beginning, followed by a very strong and at times heated debate.

The current proposal by the government to regulate the press via a royal charter has caused much outrage among the established media, many stating that it’s an affront to British Freedom and a politicisation of the press. It seems however, that a politicised press in the UK has been going on for a while, with the Sun claiming ‘It’s the Sun wot won it’ after the Blair victory of 1992.

It could therefore be suggested that a slightly regulated press is far better than faceless journalists deciding who should lead the next government, if that is indeed the power they wield.  I am sure no one would argue that the British Press has a tremendous amount of power at swaying many people’s opinions.

The suggestions now brought forward by politicians are for a regulatory body strengthened by a royal charter. The key points being as follows:

The Panel consisted of Marc Wadsworth, Editor in The Latest; Ben Hall, founder of The Hatch; Ruby Mae Moore,  Editor of Amor Magazine; Will Moy, Full Fact; John Leech MP; Anthony Logden, Journalistic consultant for the Soiety of Editors and Franklyn Addo, Writer for the Guardian.

The panel began by discussing and sharing their opinions on the proposed legislation regarding media regulation. Despite their interesting commentary, the room went from shocked silence to a flurry of discussion when many young people began sharing their personal experiences of media bias. The Youth Media Agency’s own campaign #Presschange4youth tackles this matter head on. One of the examples of media bias came from the panel itself. Franklyn Addo told the room that he was branded as a ‘Gangster rapper’ by a major newspaper after he decided to go to another university instead of Cambridge.

The group work that followed a panel discussion ensured anyone that felt left out could dive right in. Some of a more shy nature would have felt at home to speak their mind in the smaller, friendly groups that broke out after the panel discussion.

During the open group discussions, a flurry of ideas started to burst out. One group, discussing whether blogs should be considered as media outlets and hence regulated, talked at length on this issue. The internet, being such a new phenomenon has yet to take its place in society and as such could be the reason why so many policy makers wish to regulate it instead of understanding it. Could a flurry of tweets be considered blogging? Or would it be more like a conversation with friends? Both a conversation via word of mouth and via twitter has such huge similarities it is hard to such why they should not be treated as similar.

A tweet, due to the sheer number of them would only have a couple of seconds life span, however, if you hold a large audience this life span would be enhanced by the way of retweeting. Similarly if you spoke to a friend about a topic, it might be left at that, but if you held a large audience because of your title or expertise on the subject, whatever you say will have a larger impact.

Once the group conversations stopped, the panel recommenced discussing the issue at hand. Marc Wadsworth from theLatest.com, a citizenship journalism news site, spoke very passionately about the idea of a diverse and equal press, instead of a regulated press. ‘Who will guard the guardians’ he suggested. On the other hand, Anothony Longden of the Society of Editors believed that Britain does have a self-regulatory system for the press that works, suggesting that most of what is suggested is already covered in common law.

This was highly contested by many in the audience, but no more so than by Will Moy from Full Fact that repeated time and again how many mistakes and sweeping generalisations the media make on a regular bases and how long they normally take to correct those errors, which can often be over 9 months. Susana Griner, from the Youth Media Agency, showed the lack of facts in the British media by asking everyone what they thought the percentage of young people involved in the riots actually was. Many suggested that it was 50-70%, when it was in fact 1%.

This debate was an inspiring call to action for youth media agencies and for the British public at large. The press regulations suggested may not be the best way forward; but it is a start to fixing an issue that has plagued Britain for generations: A bias, unrepresentative and unaccountable media network.

The event came to a close by asking for solutions to this problem. Many different and interesting solutions came out into the open, with some suggesting that there should be a closer link between youth and mainstream media. One suggestion that springs to mind when thinking of the current proposals set about by politicians is that it talks a lot about punishing the media, but what will happen to the fines once they are paid?

Would it not be an interesting way of expanding competition and promoting new media outlets and good news coverage if the money produced by the fines was used to award good media practice and financially helping new youth media outlets? Food for thought.

Welfare – ‘To change, or not to change?’

Welfare – ‘To change, or not to change?’

Will COVID-19 reform our education system?

Will COVID-19 reform our education system?