Call for Youth Political involvement at the People’s Policy Forum 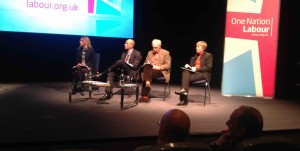 Around the end of March, Bite The Ballot, a leading UK organisation calling for better youth-aimed policy decisions, won the chance to take their cause further within the Labour party.

At The People’s Policy Forum, the local community came to hear pitches and vote for what they would like to see as part of the Labour Party’s 2015 manifesto.

Michael, from Bite The Ballot, started off his pitch saying: “The recommendation I would like to put forward is, in fact, to take away the right to vote for 16 to 24 year olds. They’re the lowest group that participates anyway; there’s not many policies written for them so it won’t make any difference and, really, lets spare the embarrassment.” Michael went on to describe the “disgrace” of current political participation among 16 to 24 year olds and the need for “a fun and engaging political education at the heart of our national curriculum and having other policies that give young people something to vote for.”