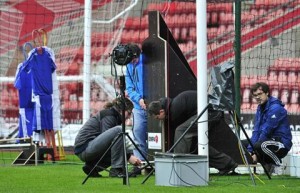 In the last installment of this article, I concluded by asking the question that I will look at now. What is it that matters most to you in football? When do the traditions of the great game start to get drowned out by modern practice, such as goal-line technology, that people are starting to cry out for more than ever?

The concern that the traditions of the game, such as the power of the referee and other officials and the free-flowing nature of the game have long been two major stumbling blocks that have concerned the hierarchy at FIFA. Indeed, FIFA President Sepp Blatter and UEFA president Michel Platini were both unanimous in being against introducing such technology on the ground, and that they believed the free-flowing game would possibly be overly disrupted by the delays that would come of using up the referee and his officials’ time to make decisions. These decisions were made when the argument for goal-line technology was in its very early stages.

Since this time, evidence for this argument in the modern game has been racking up over the past several years, and it has become increasingly more difficult to make the argument for using more officials, something now being used in both Europa League and Champions League fixtures in Europe, by increasing the number of officials from three to five, and the two extra officials being placed on the back line next to each goal-mouth. Furthermore, there are many, who believe, fans, players and managers alike, that this introduction of extra officials has had next to no effect on challenging the issue of split-second goal-mouth decisions that can, on occasions, easily be missed by the linesmen or referee.

Therefore, what seems to be becoming rather clear, bearing in mind the news that goal-line technology will be introduced next season in the Premier League, for both fans watching on and officials of UEFA and FIFA, there needs to be the reassurance that technology will be able to give an accurate outcome of whether the ball crosses the line or not to avoid the criticism that many referees frequently receive nowadays, but at the same time there also needs to be the reassurance that such decisions won’t disrupt the free-flow and fast tempo of the game.

• “Accuracy must be 100% – with no concessions made for shots that, for example, hit the side netting and bulge into the goal.
• The referee must be notified of the goal within a second of it crossing the line, as any longer would disrupt the flow of the match.
• And the technology must be able to work both during the day and at night under floodlights, and in all weather conditions.

Since my last instalment, according to Sky Sports News, FIFA President Sepp Blatter has since granted the licence for a third company that provides goal-line technology systems. The German company ‘CAIROS’ was in fact one of the very first companies to test-run goal-line technology back in 2005, but they failed to meet the criteria that was set for them. Much like their German-Danish counterparts GoalRef, CAIROS employs a system that involves having a microchip embedded in the ball, and sensors in the goal itself monitoring the magnetic field around the goal-mouth.

Their previous venture in 2005 was done in collaboration with Adidas, who are not part of their second attempt which has been granted by FIFA. In a statement made by the company, CAIROS announced that: – “CAIROS has met all the requirements set by FIFA… which passed all of the test criteria”.

Despite being originally opposed to the concept of goal-line technology, following Frank Lampard’s disallowed goal at World Cup in South Africa back in 2010 against Germany, Blatter made a U-Turn and has since been willing to grant the licence to companies such as CAIROS, Hawk-Eye and GoalRef.

What has becoming quite apparent in recent times is that those at FIFA and UEFA seem to finally have started opening their eyes to the simple fact the today’s football is a lot quicker than that of 10 to 15 years ago, and that technology in this crucial area of the game seems to be fast becoming the more obvious choice to help rectify in-game issues, especially in the light of the majorly underwhelming effect UEFA seems to have had on European games by introducing two more officials at pitch-side. There may have been a worry that by breaking from tradition in which the referee and the other officials have complete power, and becoming dependent in any sense on technology to make decisions, might have shown a lack of faith from both the governing bodies of FIFA and UEFA and a lack of support for those referees working each week, who’s jobs can be difficult at the best of times.

Furthermore, maybe those at FIFA and UEFA are also coming to the realisation that this is not the case, and that man and technology can quite easily work in harmony with one another, given that those who were originally opposed to the idea are now willing to give out licences to those companies looking to implement their technology into our leagues around the world.

Following the success of such technology at the World Club Championships in December, should such technology, in the Premier League at least, be a success come next season, it would show a massive step-forward to not only adapting to the modern game and the challenges it poses week in week out, but also by doing that without losing the support of the officials involved in games and those commanding the hierarchy at the world’s governing bodies for football.

Call for Youth Political involvement at the People's Policy Forum

Call for Youth Political involvement at the People's Policy Forum