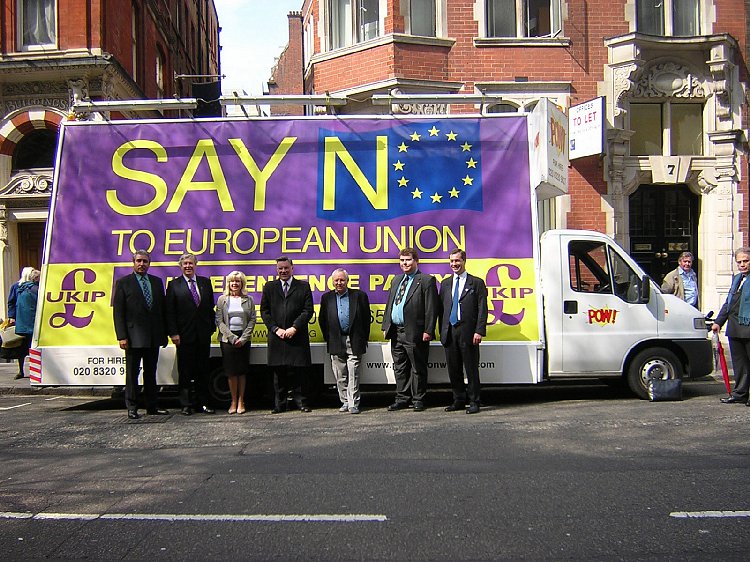 Because politics happens in the gaps in between what they say and what they mean.

The United Kingdom Independence Party (UKIP) have become an undoubted electoral force, nipping votes from parties across the spectrum in a number of by-elections and in this week’s local elections. However whether they can make the altogether trickier transition into being a political party remains to be seen.

After the tumult of their campaigning, it is interesting to study their most recent local election manifesto for concrete policies and principles. As a party founded in opposition to the Maastricht Treaty, UKIP have continually found themselves battling the moniker ‘protest party’. This is borne out by their manifesto which within the first few pages sets out the parties plan to leave the EU, halt HS2, retract planning laws and generally remove power from politicians.

What they are in favour of in very clear bold writing is common sense. Not a politician’s common sense however this is “the people’s voice”. Effectively this functions on two levels, having outlined that they and the reader dislike broadly similar things, UKIP then woos potential voters by giving them a number of scapegoats.

As you would expect, largely this consists of the European Union. In their manifesto before the 2010 general election this is the preeminent theme. However since this they have used anti-EU sentiment as an ‘open door’ to focus more sharply on much more contentious issues of popular dissatisfaction boldly stating “we stand for a lot more than that”.

Inescapably this hinges most obviously on immigration. While this has always been one of the corner-stones of UKIP policy it has been self-consciously pushed to the fore in the 2013 manifesto sub-headed “open door immigration is crippling services in the UK”. Whilst tapping into a very live zeitgeist, this ignores the fact that this is a manifesto for local authority elections and as such would have no bearing what-so-ever on immigration policy, or even where it was legitimate to refuse someone local services based on their nationality.

However there are also more subtle overtures at play. UKIP seem to be trying to tap into much broader concerns and their language is commensurately open. This starts in the prologue with the repeated factoid that “millions of people have voted for UKIP”. This follows a series of quotes from frontbenchers from mainstream political parties, including Ed Miliband seemingly endorsing the themes behind major UKIP policies (although it should be noted Miliband’s quote is taken out of context so is possibly misleading). What is clear is the message that UKIP are not a fringe party, not ‘loonies, fruitcakes and closet racists’ and similarly their policies are endorsed by a broad range of politicians.

This leads into a more interesting theme that courses through the manifesto. Having used the political credibility of the mainstream parties to legitimise their policy stance on immigration and the EU, UKIP heartily rescind it.

“We believe that government at local, national and European level has become too remote from the people.”

It seems that sentiment forms not only the bedrock for this manifesto but for the UKIP movement. UKIP are not offering any policies other than providing a broad methodology within which local politics could be conducted. Again this diverges from the more obvious overtones in the manifesto. It is a step back from the high-handed promises to unilaterally oppose wind-farms and HS2. Through local referenda and an undertaking not to have a party line locally it effectively offers people the opportunity to imagine that UKIP will help them to oppose anything that they dislike. This is what effectively renders UKIP a movement rather than a party. This disparate idealism, while invaluable on the campaign trail – which one would imagine to be UKIP’s preferred terrain – becomes treacherous and dysfunctional once presented with the merest molecule of power or authority. As many movements, such as Occupy, have found mobilisation of a disgruntled public can come quite easily but the administration of the solution to their nuanced qualms and quarrels can be much more problematic.

It is entirely possible that what commends UKIP on the stump, could well stump them when elected into office. The manifesto ends with various UKIP members gleaned from other political parties, this broad appeal, built on broad promises, gives campaigns momentum and gravitas. In office however this becomes dissonance. It is difficult to see how the promised tax cuts would be reconciled with reintroducing grammar schools and the university grant. Pulling out of international trade agreements and taxing foreign vehicles while also cutting the number of highly paid council officials. These policies reverberate around town hall rallies but in practice would career into one another in catastrophic heap.

UKIP, as a movement needs momentum to survive, it can garner this through heady rhetoric and loose promises, however if this cannot be controlled and directed it will soon veer out of control and end up stranded on the political hard shoulder.

MPs, their lives and iPads: Is Britain living beyond its means?