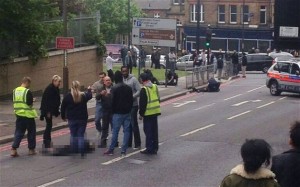 The government’s emergency response committee, Cobra, will reconvene on Thursday morning to discuss security measures after a man was butchered in broad daylight on the streets of London.

Scotland Yard’s police commissioner, Sir Bernard Hogan-Howe, confirmed on Wednesday evening that two men had been arrested and said officers from the counter-terrorist unit were leading the investigation into the “shocking and horrific” incident.

He said: “It is hard to comprehend the shocking and horrific scenes we have seen this afternoon on a busy street as Londoners went about their day as normal.”

The two suspects are in a serious condition in hospital after armed police shot them following the killing of a serving soldier in Woolwich.

Witnesses said they set about the soldier with a number of weapons, which appeared to include knives and a meat cleaver, while shouting the name of “Allah”.

The neo-fascist Jobbik Party and the World Jewish Congress

March Against Monsanto planned for the 25th May 2013

March Against Monsanto planned for the 25th May 2013