Turkey RIOTS spread after VIOLENCE in Istanbul over park demolition 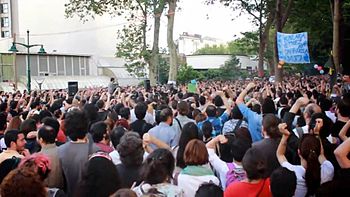 Turkey has been engulfed by a series of protests across several cities after riot police turned Istanbul’s busiest city centre hub into a battleground, deploying tear gas and water cannon against thousands of peaceful demonstrators.

In one of the biggest challenges to the 10-year rule of the prime minister, Recep Tayyip Erdogan, demonstrators took to the streets of Ankara, Izmir, Bodrum and several other cities as well as Istanbul to vent their frustration at what is seen to be an increasingly authoritarian administration.

The air of government nervousness was reinforced by the relative lack of mainstream media coverage of the drama in central Istanbul, fuelling speculation that the Erdogan government was leaning on the main television stations to impose a blackout on the ugly scenes.

Syria: Time to call a truce?