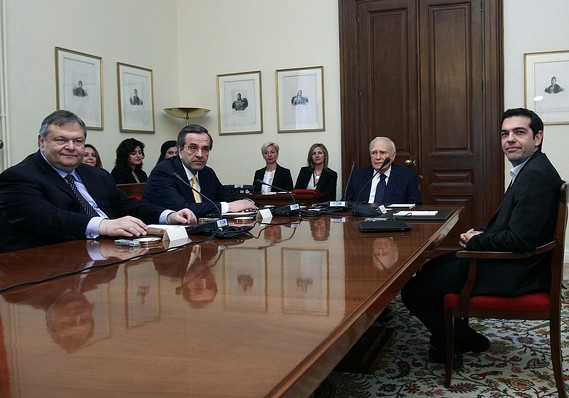 The Greek coalition government was shaken by the withdrawal of the Democratic Left from its ranks, leaving a centre-right alliance of PASOK and New Democracy clinging on to power with a majority of three seats out of 300 in the beleaguered nation’s parliament. Democratic Left took the move in response to the Prime Minister, Antonis Samaras, failing to consult his coalition partners before shutting down the national public service broadcaster, ERT, in an attempt to save public money. The immediate shutdown of ERT and firing of its 2,700 employees two weeks ago has triggered the greatest public outcry of any austerity measure yet, and has resulted in journalists occupying the broadcaster’s studios to run a TV station online. Now the state has to implement a court ruling that ERT must be re-established, but public fury remains.

With the government facing such a severe public backlash, it is questionable whether its tiny parliamentary majority can be retained for long enough to prevent a general election before the end of the year- the third general election in just two years. Such a prospect is likely to worry Greece’s creditors, who are aware that the fascist Golden Dawn party is likely to make further gains, and the hard left SYRIZA coalition may well win the largest number of seats (possibly able to build a coalition with the Communists and Democratic Left). Should these gains render pro-austerity parties to be in a minority, there will be little scope to continue the IMF/EU designed programme of spending cuts that are intended to secure returns for international investors.

The problems that we are witnessing should concern us all: this is what happens when both political and economic freedoms are curtailed: the painful decline of a developed nation to middle-income status, and the rise of crime, prejudice and generalised discord to the point where it becomes virtually ungovernable. Indeed, at a time in which foreign powers hold greater sway over a nation’s government than the citizenry does, it is difficult to think of an action so toxic for the democratic process than closing the only explicitly impartial news outlet. No wonder that it is considered unacceptable: from the Greek perspective, one could view it as further digression from the functions of a liberal and democratic society.

The current government should ask itself if its austerity programme- which is in essence the movement of resources from the general public to bankers who made a bad investment- is still politically tenable. Their country has almost reached where something has to give: austerity, the economy, or democracy. For if SYRIZA doesn’t make it into office, desperation and poverty is such that Golden Dawn will. Perhaps there is an economic case to be made for defaulting on all foreign debt and exiting the Eurozone. For it looks like these huge sacrifices made in the name of continued Eurozone membership are no better than the pain that conversion to a devalued new currency would cause. The differences are that the former is a way of maintaining the illusion that Greece is an upper-tier economy, and the latter would allow the country to get back on its feet sooner after an explicit admission of ‘failure’.

The fact is, there are some things which cannot be cut or privatised. It seems that New Democracy and PASOK, the two parties who are responsible for the debt crisis in the first place, do not realise this. That is why many consider the end of their reign to be a change that is just a matter of months away. And to be honest, that might be the best chance for Greece.

Justice Minister all but confirms wishing to leave European Convention on Human Rights.

Justice Minister all but confirms wishing to leave European Convention on Human Rights.