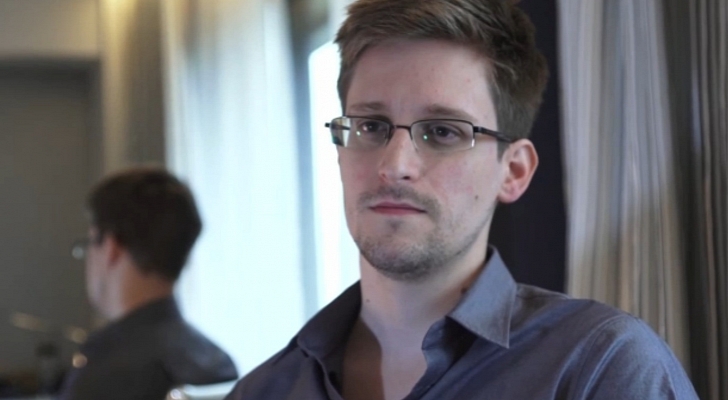 “Down in the street little eddies of wind were whirling dust and torn paper into spirals, and though the sun was shining and the sky a harsh blue, there seemed to be no colour in anything, except the posters that were plastered everywhere. The black-moustachio’d face gazed down from every commanding corner. There was one on the house-front immediately opposite. BIG BROTHER IS WATCHING YOU, the captain said, while the dark eyes looked deep into Winston’s own.”

In George Orwell’s Nineteen Eighty-Four, the government controls the population through observing their every move. The adjective Orwellian was coined in the author’s honour. Since the PRISM scandal broke, sales of Nineteen Eighty-Four have risen by 7000%.

Edward Snowden, the man who exposed the government surveillance program PRISM, will go down in history as one of the great whistleblowers alongside Peter Bruxton, Deep Throat, Julian Assange and Bradley Manning. Even those who disagree with their decision to release such sensitive information admit their influence is undeniable.

To date, Snowden has been charged with theft of government property, unauthorised communication of national defence information and wilful communication of classified communications intelligence. Nevertheless, unlike Bradley Manning, he never disclosed any information about American operations on legitimate military targets. Snowden himself references this when he rightly points out that the American government spies on its own people and its allies, “consent of the governed” is meaningless.

After exposing PRISM, the former CIA analyst fled first to Hong Kong before travelling to Moscow, where he is now in the transit area of a Moscow airport resisting extradition. It recently emerged he was awaiting a decision on his numerous requests for political asylum in countries without US extradition treaties, or would not hand him over to the Americans. However, in a legal Catch-22, the United States has revoked Snowden’s American passport, making it impossible to travel, while countries which would receive him (Venezuela, Nicaragua. Bolivia) have made it clear that he must be on their soil before he can claim asylum. He must stay in Russia for the foreseeable future.

It was likely that Snowden was originally trying to reach Ecuador, which is housing fellow whistleblower and founder of Wikileaks, Julian Assange (who is holed up in the Ecuadorian embassy in London). Like Snowden, Assange is also resisting extradition. It emerged last week that Wikileaks has provided Snowden with legal counsel, advice and funds.

PRISM, launched in 2007 by the National Security Agency (NSA), monitors data on the servers of nine of the United States’ major computer companies including Google (and YouTube), Microsoft, Facebook, Yahoo, AOL, Skype and Apple. This data includes emails, video clips, photos, voice and video calls, social network details, login information, and much more. PRISM’s reach appears to be unlimited, just like the Thought Police from Nineteen Eighty-Four. Describing PRISM’s reach to Glenn Greenwald in a hotel in Hong Kong, Snowden said he could spy on “you, a federal judge, to even the president if I had a personal email.”
And he hasn’t been proved wrong. The first of Snowden’s leaks emerged in early June, when Snowden revealed that phone records were handed over. Something which caused more of a stir, however, is the revelation internet companies were tapped using a surveillance programme named PRISM. The extent of US spying knew no boundaries, as it spied on it’s own people and their allies as well as China. Last week it emerged EU offices and embassies were bugged.

The scandal also brought British Intelligence into the spotlight. General Communications Headquarters (GCHQ), were accused of using PRISM to tap telephone cables. Snowden’s leaked report on the subject claimed GCHQ had the potential to monitor up to 600 million communications a day, and was sharing whatever information it had with the United States.

For many, the most shocking development in this story is that the government’s had done nothing wrong: the law was simply too vague and too lenient on data collection. As technology becomes more advanced, the law must adapt to it. For example, a clause in the 2000 Regulation of Investigatory Powers Act (RIPA) says that a warrant is not needed to monitor data if the source is abroad. Since telephone cables are relayed abroad before returning to the U.K., GCHQ applied old law to new technologies.

Orwell warned us of the dangers of mass surveillance. Recent revelations have shown the population’s private data was not being investigated with proper regulations and controls (the data was not held securely and destroyed after use, neither was the system was not subject to regular review), for the vaguely-defined purpose of fighting ‘terrorism’, but this was clearly completely out of control. This is not to say the state should never interfere in any area of life – difficult times require tough decisions to be made, though one would hope the merits of either side would be weighed and a decision would be made on that basis – but PRISM had no respect for privacy and demonstrates just how much of a prophet Orwell continues to be.