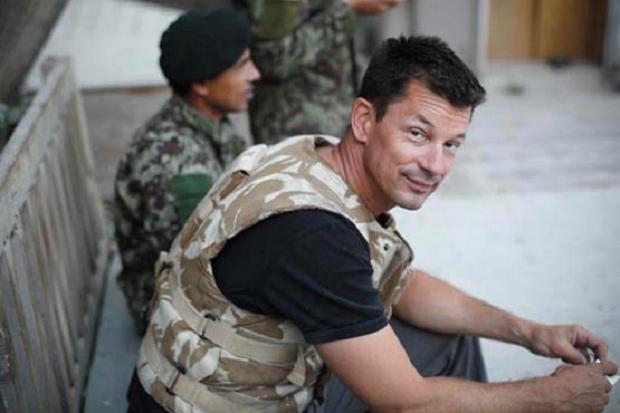 The UK’s prominent presence in much of the world, especially Afghanistan and Iraq, has meant that as a nation it has been a target for terrorists, and for many conflict journalists these dangers can be experienced first hand (like John Cantlie pictured above). For this exclusive I recently travelled to London in search of answers over how we in the UK actually respond to the ever-present threats that are made against us overseas. We hear every so often of a journalist kidnapped and held for ransom or of a number of British tourists attacked whilst abroad. So my job was to search for answers over not just how often and where kidnapping situations occur but also why they are happening. Furthermore the purpose being to enlighten the British public to some of the unknown or unconsidered dangers present in today’s world.

I was lucky enough to be able to arrange an interview with a member of a company called “red24” a crisis management and assistance firm based in the heart of the capital. The member of “red24” in question was a woman named Frances Nobes, the Global Risk Analyst for the company. For legal and discretionary reasons she was not allowed to disclose certain information regarding current cases and names of affiliates. But nevertheless provided me with a brilliant insight into how the company works. Here is the first instalment of what she had to say:-

Q: What does being a Global Risk Analyst demand?
“My job has a couple of different parts to it. One of the main parts is for me to look at ‘open-source’ intelligence and ‘privileged’ intelligence in relation to security. So for example I write a variety of different reports for people about security incidents around the globe and compile risk assessments and security assessments for different countries.
Along the lines of that I also work with regional analysts and crisis specialists in our office down in Cape Town. Overall it’s about providing information and examination and offering a spectrum of analysis.”

Q: What are the specific criteria that you put into these reports?
“We look at a range of factors. For instance we could have a corporate report where people are looking to set up a business or conduct business abroad, for example setting up a mining project in Colombia. One of the things we would look at when writing it is the political situation in the country, thing such as ‘how stable is the government?’ and ‘is there a sense of law and order within the authorities’? Also are there elections coming up? Does the country have a history of violence around times of the elections?
One major interest, especially in places like the Middle-East is civil unrest. We look at what physical security is in place and what the crime rate is like in these countries, and of course there is also the risk of kidnapping and extortion to consider. In addition, are there any cultural aspects they should be aware of? For example if you are visiting a Muslim country how weekends differ and how days operate around hours of worship. Again, for example if I were travelling to Saudi Arabia, as a woman, there would be certain things I would and wouldn’t be allowed to do. These aren’t necessarily tips but more providing awareness, ranging from broad topics right down to the specifics of a country”.

Q: How often do you receive demands for these reports?
“It really depends on the client. One of our main partners is a major high street bank in the UK, and if you are a premier account holder with this bank then you have certain access to red24 facilities. Some of these clients may go on holiday to places like Thailand, or head off on a safari in Kenya, and so these people can request reports on these places.

The type of reports I focus on, specifically the corporate reports, they are in rather high demand. On average I write two big corporate reports each month. After that I will end up writing several smaller ones which will relate to specific risks that people will want information on. For example they may just ask for a report specifically on terrorism or kidnapping.

Q: What businesses/organizations can be targeted?
“It really depends on where you are in the world. Depending on what country or region you are in there could be a lot of tension. I would say that the majority of incidents that make it into the media are things like when, what many would call ‘Western’ companies are operating in ‘developing’ countries. For example these companies may want to monitor attacks on oil pipelines, mines, gas facilities and shipments. These companies will often be targeted mainly to cause disruption in operations for trades like this. By holding power over such things in different countries it gives these groups leverage when it comes to ransom”.

It is clear so far then that red24 have many things to consider when assessing the nature of each country. Especially when Nobes is writing these large reports that not only cover the key issues in each country but every possible piece of guidance they can offer right down to the tiniest detail. What Nobes also revealed is that the larger companies trading abroad, particularly what those outside of Europe would call ‘Western’ companies, are targeted whilst they monitor or control certain financial aspects in developing countries. This to me doesn’t seem particularly surprising that there are backlashes when Western companies control the flow of vital and scarce resources in parts of the world.

In the next instalment of this investigation I will be revealing what happened in the next segment of the interview. I continue to learn the interesting avenues that companies look to go down so they can analyse and adapt to the risks that some countries pose. But I also begin to find out the changing tactics that rebel groups in other countries are now starting to employ to get what they demand from those they get hold of.