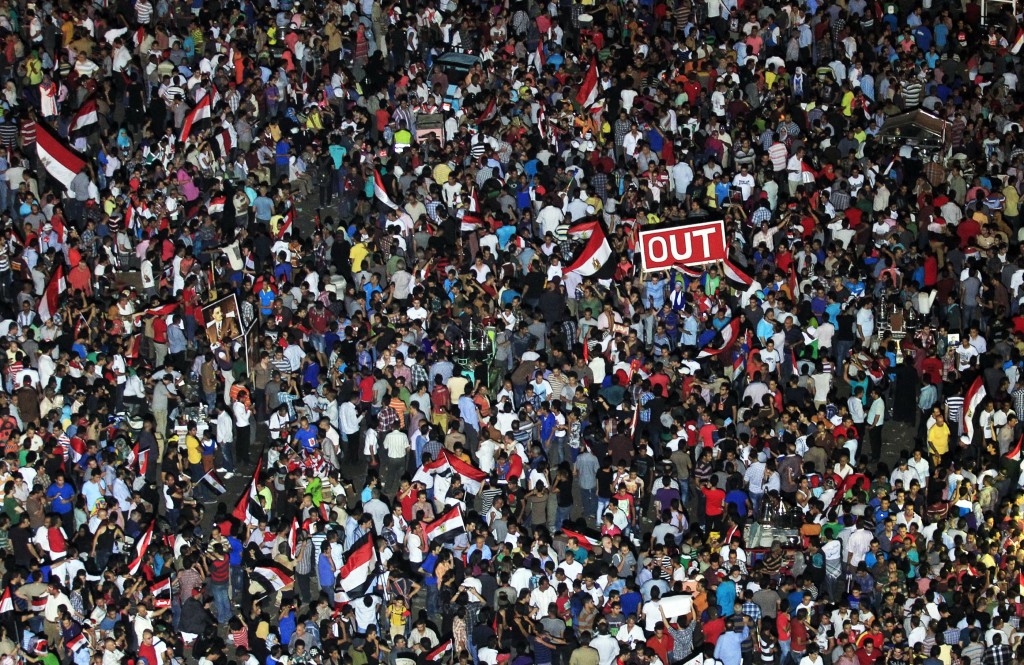 A little over a year ago Mohamed Morsi was democratically elected as Egypt’s first President. The military played a role in making this possible. Today the military also played a role in removing him from office. What does this tell us? It simply tells us that ‘no condition is permanent’.

You may occupy a high office today and tomorrow no more. And you may equally be ‘nobody’ today and tomorrow a household name. At the time Morsi was elected I was doubtful of his ability to deliver, bearing in mind his link with Muslim Brotherhood. Any Head of State’s role is that of a father/mother to the Nation to which he or she rules. As God allows His sun to shine on the good as well as the wicked, so also should a Head of State protect the interests of every citizen in his or her nation while the citizens in turn pay him or her with their allegiance. It does not matter the colour of their skin, creed or sex.

Egypt’s first freely elected leader Mohamed Morsi was given 48 hours by the military to respond to the tens of thousands of people on the streets protesting against his style of governing the country. Morsi perhaps would have thought that his presidency was permanent and so did not take the two-day dead-line seriously. He would have probably thought that his presidency was more important than the voices of the people he was governing. At the expiration of the two days dead-line the military acted promptly and so Morsi was ousted and Justice Adly Mansour took his place.

Justice Adly Mansour was sworn as Egypt’s new interim President less than 24 hours after Morsi was ousted. After his swearing in he thanked the youth and the press who saw the direction the former President Mohamed Morsi was going and protested. The wrong style of governance would throw Egypt into a cataclysmic state. The Muslim Brotherhood had their own agenda with their member being President and ruling a country like Egypt that was at once the epitome of civilisation.

A careful analysis of the situation of events that toppled Morsi would show that it had been in the pipe-line for a long time and probably would have had the approval of the West. The military installed a civilian to run the affairs of the country until another election and with this it will not look like a military coup meaning Egypt will retain her relationship with the West.

A number of times I was offered cheap flights with Egypt Air to certain destinations and each time I declined to accept the offer, because of safety. I am sure many people would share similar views with me. Egypt at one time was centre of civilisation; one can imagine the knowledge of the Egyptians in embalming, this was thousands of years ago. In fact the first University in the world was in Timbuktu in Mali. Writing began in Egypt. But today what position in development are Egypt and the Maghreb occupying? I have dreamed of visiting Egypt to see the Pyramids and other places of interest but how can I when one is not sure if he or she would be cut up in violence.

Islamic leaders and preachers in Egypt and the Maghreb should teach and preach to their followers to follow good examples and not the bad ones. The Muslim Brotherhood had a different agenda after Morsi won the election. Morsi during his inauguration said that he would be President to all, yet after he took over the government was unable to protect the burning of churches or to issue tougher penalties to those Islamic fundamentalist who perpetrated those acts. Anyone who hates another has killed in his or her mind already and so has not kept God’s commandment that says, ‘Do Not Kill’. And the end result is hell. There is no such thing as being martyred. Any person belonging to any religious group that embarks in violence should think again. Anyone who engages in violence is living in the past. There must be religious tolerance in Egypt and the Maghreb. God does not force anyone to worship Him but there are consequences if you don’t. God expects worship out of love and not under compulsion. Worshipping God out of love for Him as our Creator gives us an edge over one who is being forced to do so. As a religious scholar I know that that is not what Islam is all about.

During Mohamed Morsi’s regime, he had no respect for Egypt’s judiciary, the media, the police and even artists. It is not the number of times a day one prays that determines that person’s closeness to God. The only worship that is pleasing to God is that backed by obedience and righteousness. Most of the times violence has been perpetrated have been as they are coming out from Friday prayers. This makes one begin to wonder what was in the people’s minds as they were praying. One cannot be coming out of a place set apart for the worship of the Creator and start perpetrating violence. Those who are protesting against the takeover must first have the interest of their country at heart.

The concerns of backlash were made manifest when straight after the Friday prayer violence erupted, which resulted in the death of their fellow countrymen. I believe if the Muslim Brotherhood had the interest of the country at heart this wouldn’t have been the case. The warning coming from some observers was that the risk of an extremist backlash should not arise if those extremists have the interest of Egypt at heart and realise that Egypt belongs to all Egyptians. These extremists should bear in mind that violence in any region chases away tourists. Revenue that would have been derived from tourism is lost.

Mohammed Ayoob, a professor emeritus of International relations at the Michigan State University, said that the ousting of Mohamed Morsi should teach the Islamists in the Middle East and the Maghreb a lesson that they will not be allowed to exercise power no matter how many compromises they make in both the domestic and foreign policy arenas.

Egyptians and people of the Maghreb, it is time to learn to love one another as God commands. Do not allow the devil to deceive you in to killing one another. Killing and destruction of properties, particularly any place set apart for the worship of the Creator, is not of God and the punishment for these acts of violence is great.