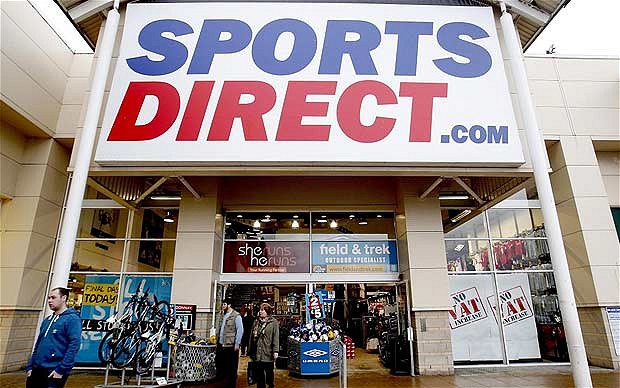 Zero-hours contracts: having written about them a few months ago, it seems that Sports Direct have taken it to the extreme. Despite the use of zero-hours contracts being good for a small number of staff, as was my opinion in the last article, I don’t approve of a company putting all but 10% of their staff on them. In reality, a zero-hours contact actually includes no sick pay and no holiday pay. This may not matter to students who often use them in order to pay their loan but to a person with a family, this is very important.

In other words, it doesn’t seem logical to do this and is edging on immoral. Do big companies such as Sports Direct not care about hard working people who deserve a break? It seems not. A campaign on 38 Degrees aims to put this to a stop and for employees sake, I hope it succeeds. I hope that Mike Ashley, Dave Forsey and Keith Hellawell feel guilty, sitting in their offices, taking big bonuses.

According to figures released last year, Sports Direct have a workforce of 18,000 which means that 16,200 of those are on zero-hours contracts. That’s a lot and I have to admit that they do a good job of providing jobs for UK citizens but whether they are stable jobs is another matter completely. The government are all for stable employment but the fact is, many companies aren’t providing it.

Sports Direct are now one of the biggest, if not the biggest sports retailer in the UK which means that they have a big responsibility. I can see that they want to save money but they need to provide jobs for the currently unemployed. I have just sent an email through 38 degrees to Sports Direct and I suggest that you do to. If it doesn’t actually stop, we need to start to see a change in Sports Directs policy towards employing people.

Zero-hours contracts work for many people, such as students and people who perhaps have young children to look after but as people get on in life, they want to have a stable income in order to live properly. That’s the important message here and the bosses at many companies, including Sports Direct need to get that into their heads.

Admittedly, I do think that some of the campaigns that 38 Degrees run are a bit farfetched but I also agree with them a lot of the time on important issues that I’m sure matter to a lot of people. Employment, as we saw in recent figures, is getting better but with things like this, it’s an issue that needs addressing. So does your letter to Sports Direct but that’s a different kind of addressing.

Having given a lot of praise to this practice not all that long ago, I now see that there are big disadvantages, especially if they are over-used. The fact is, I’m not actually on one myself and I actually work from home so I don’t even know what it’s like to be on one. Regardless of that factor, it is unfair and as I say, edging on immoral to have 16,200 people employed on the basis that many may never be called in. In small numbers, it’s fine but it’s ridiculous to think that employment is getting better when many of those are on contracts where they are called in on demand.

If there is to be mass use of these types of contracts, companies need to think again and the government needs to take a step back and think of some restrictions that would help regulate this use and Sports Direct, well, they need to stat caring about their staff more.

Why Everything Westerners think they know about Iran is Bullsh*t! A thought experiment

Unite or Fight? Money and Power in Politics

Unite or Fight? Money and Power in Politics