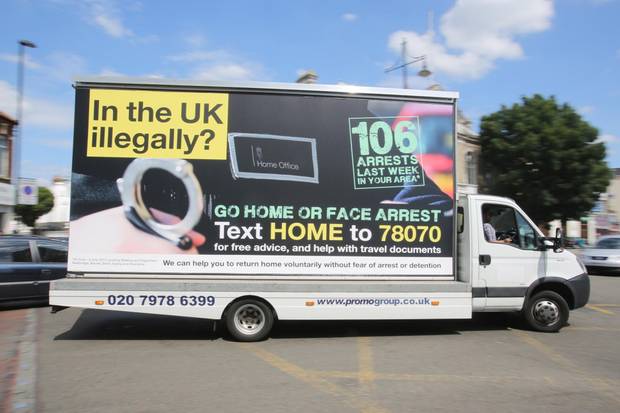 Immigration has been a hot topic in Britain for many years, with public dissatisfaction on the major parties’ policies on the issue being so great as to trigger the emergence of UKIP as a major political force. Figures on both sides of the political spectrum have been shocked by the surge in support for a party that poses a real electoral threat to the status quo. However, this is not an article about UKIP – there have been plenty of those this year. This is about developments within the governing Coalition which have been condemned by UKIP’s leader, Nigel Farage, as being “nasty” to immigrants.

The British public have an expectation that Labour and the Liberal Democrats will be “soft” on immigrants, the Conservatives will raise concerns about the impact of a growing population but fail to address them, and UKIP will be the ‘toughest’ party on the matter. That is why there is widespread surprise at the news that Farage has condemned a Government initiative to distribute literature urging illegal immigrants to accept voluntary deportation. Under the campaign, leaflets will be handed out in internet cafes, money transfer offices and other areas where immigrants are likely to frequent, in addition to placement of messages on billboards and lorries in migrant hotspots. In order to encourage responses, illegal immigrants are invited to text “HOME” to a number in order to receive free “assistance” to return home.

Advocates of the policy, which is currently being trialled in six Inner London boroughs say that it is much more cost effective and humane to conduct deportations “without leading people away in handcuffs” and that anything which can be done to prevent arrests should be welcomed. Opponents however note that the plastering of anti-immigrant messages in communities has a somewhat authoritarian and divisive feel. Nigel Farage has developed on this point:

“What the billboard should say is: Please don’t vote UKIP, we are doing something….I think the actual tone of the billboards, it really is Big Brother, nasty, it’s unpleasant. I don’t think using messaging like this makes any difference.”

It does indeed appear that the Coalition is running this controversial scheme to prove to a cynical electorate that it is not being inactive on the evasion of UK border enforcement. Running an advertising campaign may not work, but it is more visible to voters than increased staffing and training in the UK Border Force. Once more, the depressing reality is that politicians are more concerned about populist posturing than pragmatic, rational decision making. It isn’t just the politicians who are to blame, though: it should be a national embarrassment in Britain that their representatives feel the need to compete to be seen as the most effective persecutor of a disadvantaged, albeit law-breaking, group.

There have been repeated calls for a balanced, open discussion about what level and type of immigration Britain should accept. Such a debate is badly needed, and likely to result in the reasonable conclusion that the country should reduce its intake of unskilled labour that has been flooding its employment market. However, a constructive dialogue will not succeed unless serious prejudice and ill-feeling towards some groups is truly eliminated. Lip service towards inclusion and equality does not benefit anybody when initiatives such as ‘big brother billboards’ are deemed a tolerable and respectable use of public funds. Unfortunately, it appears that there is a formidable coalition of political and media interests in the UK which will whip up such anti-immigrant hysteria that prejudice will only harden in the coming years. And that is one of the greatest wasted opportunities in modern British history.