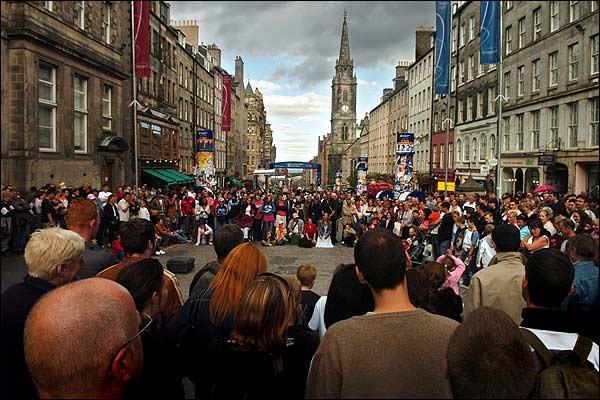 The Edinburgh Fringe, one of the best and most famous arts festivals in the world but it’s no place for politics, is it? It may be surprising to hear but political comedy and theatre are a big part of the Fringe. From a play depicting Gordon Brown in his final days of office, spilling out his political regrets to the audience, to Chris Coltrane, a great political comedian (despite his insistence to read from notes). Within these acts were jokes about Gordon Brown to the coalition governments supposed rhyming policies.
Despite the fact that I saw just a small sample of what was on offer, it was a great show and something that I would definitely do again but perhaps in a few years. Coltrane, who performed at the Fringe, was very funny, mainly down to the fact that he told some absolutely ridiculous stories while hoping there were no judges or policemen in the audience. From stories about his experience of UK Uncut to pointing out some obvious flaws in the coalitions plan or maybe now, ex-plans.

When I spoke to Coltrane, this is what he had to say about his show and his love of political comedy:

“The show is my attempt to show people that love is the enemy of the tories. I try to argue that they try to make us hate poor people & blame them for our debt, when actually it’s the fault of the rich. If we remember to be compassionate, we can fight back against their hate and lies.
I got into political comedy because when people are laughing with you, they’re on your side, and so much easier to brainwash.”

There are various types of political comedy. Sit-coms being the most famous, then there are The Poke’s hilarious videos which famously ridiculed the Deputy Prime Ministers “I’m Sorry” speech, and then, then there’s Chris Coltrane. I’ve seen stand-up political comedy before but perhaps it was the factor of actually being there in the flesh that made it that few stars better. Perhaps that should be that few laughs better though. One thing that any political comedy failed to pick up on completely was the amount of U-turns that the government but I guess that comedians, especially when deciding the topics to cover, have a few U-turns of their own. Trying to decide which politician to embarrass first must have been a mammoth job.
One of the topics that did come up was our friend Boris Johnson. Coltrane notedly said about his ability to actually make a decision, which no one thinks is all that good, as well as the view that I think everyone has about Conservative Party Leadership. No Boris, you aren’t quite the person for the job. If Boris were party leader, God help us all. On the other hand, according to the sign at the Fringe, God has been found dead in the Sainsbury’s car park so if Boris does ever get any sort of other leadership apart from London Mayor, we’re all doomed.
Right, back onto my main point. Chris Coltrane is no amateur at this business and currently has a big following on Twitter @chris_coltrane and a weekly podcast called Lolitics which is available from iTunes for Free. His show, Chris Coltrane: Compassion is Subversive, is very good and has had five star reviews before. If you get the chance to go and see him at one of his other shows, GO! You might regret it, otherwise.
What started as an intention to do an overall review of the Fringe’s political comedy, now is really a review of Chris Coltranes’ show but I enjoyed what I saw and what I saw was just a fraction of the comedy and theatre available. Despite this, a month of arts and comedy is only just beginning. If you do have tickets to go to the Fringe Festival, I would recommend going to see Chris. I’m sure he would too but that would be boasting. If you don’t believe me, why not check out his website at www.2013.chriscoltrane.com but be warned: it contains a slightly weird picture of Coltrane and George Osbourne.
Previous Post

Why not… buy and sell Human organs?