Colombia’s War: An end in sight? 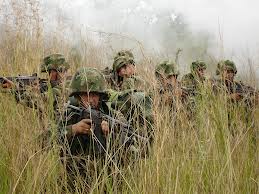 For over half a century Colombia has been embroiled in a vicious civil war, fought on one side by the infamous Revolutionary Armed Forces of Colombia, or FARC, and on the other by the embattled Colombian government. In a testament, perhaps, to the worlds continuing obsession with our Middle East incursions, the disastrous consequences of the continuing violence, namely over 600,000 dead and over 1.3 million civilians displaced since 1958, have been largely ignored. Recently however, there has been a renewed push for peace, beginning with concrete peace talks in Cuba between FARC and the government of Juan Manuel Santos, the current president of Colombia. Both sides have displayed a willingness to create a peaceful solution, and hopefully without any forced involvement by the US, an original actor in the violence that has ripped through the country, a settlement can be reached. Do these discussions signal an end for over half a century of brutality for Colombia and its population?

FARC developed initially as a military offshoot of the Colombian Communist Party in 1964 following a vicious civil war. Its ideology is described at ‘Marxist-Leninist’, combining revolutionary fervor with a quest for social justice and protection for rural peasants against perceived government violence. The movement itself is seen as an anti-imperialist reaction to the repression of the communist poor in the 1980’s by the American funded Colombian military. Unlike other paramilitary organisations, FARC has stood by its populist ideals through most of the conflict, demanding land reform and greater representation for the poorest of Colombia in its manifesto. FARCs support is still drawn from the most rural communities, a large proportion of it military force are young civilians it inculcates against central government. Multiple kidnappings, most famously the abduction of Ingrid Betancourt, the Green Party candidate and many military and civilian kidnappings formed the FARCs procedure during the early 2000s. FARC has also targeted oil and coal centres, hoping to free the abundant natural resources of Colombia from the clutches of multinational corporations and return them to the local population, a strategy that shores up support for them with the large proportion of the population that live in suburban and rural areas.

The Colombian government’s response has been largely varied. In 2002, president Alvaro Uribe was elected on a platform of aggressive anti-drug and anti-terrorist measures, unlike the previous incumbent. This lead to many years of a violent back and forth between FARC and Uribe in the struggle for power. Uribe did enjoy success against FARC, taking a hard line stance, and pushing them back into their strongholds in the jungle. In his offensive strategy against FARC rebels, however, Uribe is accused of creating laws that allow for the search and arrest of people without a warrant, with investigations that were based on unverifiable information from dubious sources. Now, however, he is fiercely opposed to the peace talks started by his successor, asserting that there should be a ‘conditioned suspension’ of the talks until different conditions are imposed, most especially a ‘verifiable end’ to the FARCs criminal activity and the guarantee that there will be no exemption from prosecution for those rebels who have committed crimes, a stipulation forcefully rejected by FARC leaders. Currently, FARC is considered by the Colombian leadership to be a rogue ‘terrorist’ group, however in the course of obtaining peace there is discussion of this classification being changed in order to ease FARC’s proposed transition into regular political activities. In light of recent developments that signal FARC is prepared to halt its violent campaign in order to be seen as a legitimate organisation, this would seem a positive step to take in the process of creating a peaceful solution.

Another aspect, which complicates the already fractured lines of this struggle, concerns FARC’s involvement in the cocaine smuggling industry. Recent estimates state that they are responsible for over 60% of Colombia’s internal cocaine production, plus a large amount of the international supply, causing questions to be asked about the vacuum that will be left in the supply structure of the drug if FARC agrees to halt its involvement. Many wonder what kind of organisation would attempt to fill the gap, as Colombia is now the 3rd biggest producer of cocoa in the world behind Peru and Bolivia. If the government does not respond to this shift in control, other cartels, paramilitary cells or terrorist groups could gain a hold of the vast infrastructure of cocaine-paste production, and the results would be catastrophic, as once again a rogue group has control of a system which fuels terrorist groups and extremists around the world.
The massive amount of control exercised by FARC over the drugs trade was shown in 2005 when 50 leaders of the organisation were indicted by the US on charges of importing over $25 billion worth of cocaine into America, and controlling a large proportion of the worldwide supply of the drug.

The peace talks have already passed a significant point, concerning the land reforms demanded by FARC, which many thought would cause the collapse of the entire enterprise. FARC negotiator Ivan Marquez has said that the conflict is ‘nearing an end’, emphasizing that the process is continuing slowly and does not include the discussion of ending FARC’s armed struggle at this time. These admissions do cast doubt on the chances for success of these talks, the fourth of their kind since the beginning of the violence. It remains to be seen whether FARC is ready to lay down its arms and enter into the formal political life of Colombia, and if the current government is willing to accept a group that has kidnapped and killed numerous civilians and soldiers in its continued fight for power and bring them into the fold. Only time will tell if the peace talks yield the results that Colombia so desperately needs, an end to the violence that has terrorized them for such a long time.

EXCLUSIVE: How does the UK deal with kidnap and terror threats? (Part TWO)

EXCLUSIVE: How does the UK deal with kidnap and terror threats? (Part TWO)