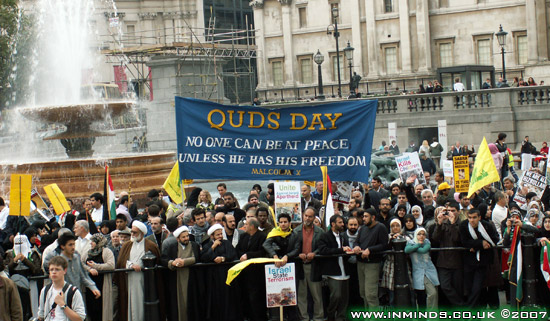 The last Friday of Ramadan saw millions of Iranians take to the streets. Crowds chanted “Death to Israel!” while theocrats preached that Israel stole the land it occupies from the Palestinians, often overstepping the line between criticism of Israel and anti-Semitism in doing so. The rhetoric reinforces – and is designed to reinforce – the widespread belief that Israel does not have the right to exist. This is Al-Quds Day and it is a day of hate.

Al-Quds day (translated as Jerusalem Day, Quds being the Arabic name for Jerusalem) is one of the two most important Iranian holidays, the other being the anniversary of the Islamic Revolution which brought Ayatollah Ruhollah Khomenini to power. The day is meant to be a day of worldwide Muslim solidarity with Palestine, condemning Zionism and breaking Israeli control of Jerusalem.

Jerusalem has great significance for all the Abrahamic religions. For Muslims, it is the third most holy city in the world. It has the oldest surviving Muslim religious building outside the Arabian Peninsula, the Dome of the Rock, and many Muslims believe it is the site Muhammad ascended to heaven during his Night Journey. The Dome itself is considered by Iranians to reflect the attitude of Al-Quds day, since it is a physical representation of Islam superseding the other two Abrahamic faiths, Judaism and Christianity. Prior to the shrine’s construction, the site is believed to have housed the ancient Jewish temple, which was destroyed by the Romans. It would later be the site for the Church of St. Cyrus and St. John. After the Siege of Jerusalem, the Dome was built by the victorious Muslim forces to demonstrate Islam was the final revelation from Allah. Again, the belief that Islam has superseded the other faiths is evident because of the writing on the Dome. Taken from the Quar’an (Surah 112), it was selected to correct what Muslims believe is the principal Christian error: “Praise be to God, who begets no son, and has no partner” and “He is God, one, eternal. He does not beget, He is not begotten, and has no peer.” Iran has used the significance of the Dome very well in its anti-Israeli propaganda. This anti-Israeli sentiment has reached the point that the country created a holiday designed to promote hatred of Israel, who control the shrine.

Al-Quds day is an annual event, and has been held every year since 1979. The biggest demonstrations are in Iran, but other groups sympathetic to Iran’s particular pro-Palestinian opinion also stage their own demonstrations. These range from terrorist groups like Hezbollah to local sympathisers in other countries. Rallies are held worldwide, and often counter-rallies pop up to express support for Israel and Zionism. One particular rally in Toronto this year gained notoriety when speaker Elias Hazineh said “We have to give them [Israelis] an ultimatum. You have to leave Jerusalem. You have to leave Palestine…When somebody tries to rob a bank the police get in, they don’t negotiate and we have been negotiating with them for 65 years. Get out or you are dead. We give them two minutes and then we start shooting, and that’s the only way they’ll understand.” The speech, uploaded to YouTube, was condemned by Israeli and Jewish groups around the world.

Internally, the speeches on Al-Quds day demonstrate the central enterprise of Iranian foreign policy and show no sign of changing. These speeches do more than just attack Israel’s legitimacy and Zionist ideology. The content goes further than calls to stand with the Palestinian people and liberate Jerusalem, and denounces the ‘usurper state’ of Israel itself. Though all politicians give speeches, the day is used by those aspiring to a career in politics to establish oneself by confirming their loyalty to what is essentially the central theme of Iran’s foreign policy. Many go further, overstepping the mark between criticising Israeli policy, leading into explicit anti-Semitism. The outgoing President Mahmoud Ahmadinejad used Al-Quds day in 2009 as a platform for Holocaust denial during his speech. Reuters has quoted him as saying that the Holocaust was “unprovable” and “mythical”, created solely by Jews for Zionist purposes. He called upon all Iranians to oppose Israel as a “national and religious duty.”

While Ahmadinejad continued his inflammatory rhetoric this year (“I will inform you with God as my witness, a devastating storm is on the way that will uproot the basis of Zionism”), the man who has now been installed as the new President of Iran, Hassan Rouhani, raised eyebrows when Iranian state media outlet Press TV quoted him as saying Israel was a “wound that had sat on the body of the Muslim world for years and needs to be removed.” Rouhani is considered a moderate and Ahmadinejad has been promoted to the Supreme Leader’s Advisory Board. Later, a ‘corrected’ version of Rouhani’s statement was issued saying “In our region, and under occupation of Palestine and dear Al-Quds, there has been a wound on the body of the Islamic world.”

The anti-Zionist theme of Iranian foreign policy has now become so obsessive it has a ballooning effect, creating a national holiday, marches and parades to hate an ideology. However, when the region is already tense over Syria’s civil war and Palestinians and Israelis are ready to negotiate a potentially lasting peace deal, Iran’s public hatred and specific instances of anti-Semitism are disgraceful. If peace is to be achieved, petty grievances must be dropped and communication between nations must resume.