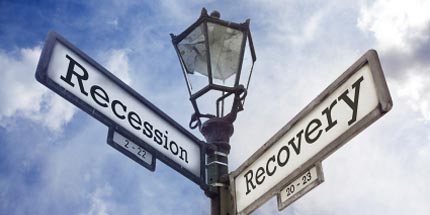 So at last the Eurozone is out of recession, after a year and a half of its economy shrinking quarter upon quarter. The growth of 0.3% in GDP is slight but comes amidst other positive signs; such as an increase of 0.7% in industrial production for the Eurozone in June, France coming out of recession and a sharp increase in Spanish exports. The common consensus is however that it has been economic improvement in Germany and France that has pulled the Eurozone onto the right side of the 0.0% line, and it has always been clear that it has not been these countries whose populations have been receiving the cruellest consequences of this recession.

The disappointing thing is that whilst the economic situation (although overall mixed) is averaging out positively the human situation is still in decline. This might seem an odd point to make, after all the number of jobless fell by 24,000 between May and July, but the problem is that nothing fundamental has changed since 2008. This improvement isn’t the result of redistributing economic power into a network of small businesses, thus reinvigorating competition within a free market; this improvement isn’t the result of the European Central Bank writing off debt to liberate spending and increase consumer confidence. This improvement is in the most part the long awaited result of the imposition of austerity, buying for time by the colossal bailouts of centralised institutions and that everyone has had the opportunity to chill out a bit since the Euro and the Eurozone looked so utterly doomed a few months ago.

Earlier in the spring the Cyprian government froze and took large amounts of money from Cypriot bank accounts as part of an agreement to secure a €10bn bailout. In June a study published in the British Medical Journal warned that austerity cuts in Spain could see large parts of the health service dismantled and the health of the population significantly harmed. In July Greece arranged to fire 25,000 public service workers (trumping the fall in joblessness mentioned above) in order to secure further bailout payments. We once saw all of this as the unhappy tidings of recession, but in truth they are as much the symptoms of recovery. They are the result of down payments made in the form of austerity to secure the bailing out of large and supposedly powerful centralised institutions.

Now that the Eurozone is out of the threatening depths of recession the methods thus far used to try and restore the status-quo may, in the cold light of day, appear a little shameful. It is perhaps regrettable that the powers that be were not a little more imaginative in how they tackled the continent’s financial problems. However the recovery in the Eurozone is far from over, and there remains opportunity still for the employment of more radical techniques to improve Europe’s economic wellbeing.