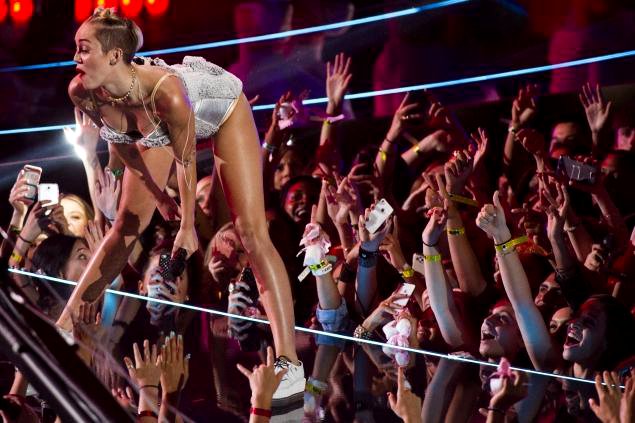 All grown up? Miley Cyrus causes social media storm with twerking performance at MTV VMA’s, but she’s not the one losing out
This week Miley Cyrus stunned the world with a fiery performance at the MTV VMA’s. The star studded event showed a shocking side of the former Disney star as she put on a raunchy performance which involved twerking teddy bears and seductive dancing with singer Robin Thicke – a man more than ten years her senior.

People took to social media throughout the week to express surprise and even anger at the performance. Many people complained that the former Hannah Montana star is acting as a bad role model to young adoring fans. Thousands of social media users flooded to YouTube to post reaction videos and Facebook was filled with memes mocking the 20 year – old singer. One Facebook user said: “Her attempts to show everyone that she has grown up make her seem like a little girl begging for attention, which is very ironic.” This isn’t the first time the singer tried to flaunt her twerking “skills” to the social media world, a few months ago the star even posted her very own twerking video.

The real question we have to ask is: why are stars doing these outrageous antics? The answer is that the mainstream music industry requires stars to do crazy things in order to stay in the headlines. No matter how much hate Miley Cyrus gets, she will still be in all of the newspapers and viewed all over the internet; people will talk about her on social media and inevitably people will listen to her music. We only have to look a few years back at the crazy acts of Lady Gaga and her meat dress in 2010 to realise that these artists have to feed the people with all sorts of crazy ideas in order to gain more attention; keep them in the headlines and to have successful careers. It is no longer just about talent but about how you can portray yourself to the world and crazy or ludicrous seems to get more attention than amazing or talented in our somewhat messed up society.

People argue that Miley Cyrus is supposed to act as a good role model for young girls but keep forgetting the fact that she has grown up and is no longer Hannah Montana. If parents are so concerned with her current image they shouldn’t allow their children to listen to her music. Using these young stars as role models is clearly not working anymore because of the current state of the music industry, they have to do crazy or raunchy things to stay in the headlines and therefore could never be good role models for our children. It is the sad truth of what our world is coming to. The innocent Hannah Montana has gone long ago as Miley Cyrus has made her transition from young girl to woman. The performance received a number of complaints from the Parents Television Council who stated: “How is this image of former child star Miley Cyrus appropriate for 14-year-olds?”

In fact, Cyrus isn’t the only child star who has succumbed to the vicious nature of the music industry; Justin Bieber has also come heavily under criticism for his behaviour this year. However, these stars are not the ones losing out, it is the people that mock them on the internet who are because they just get talked about more and stay in the headlines for longer. What we have to do is criticize the state of the industry.

Miley Cyrus even seemed proud of her raunchy performance and took to Twitter to boast: “My VMA performance had 306,000 tweets per minute. That’s more than the blackout or Superbowl!” It’s no surprise why so many stars feel like they have to do the outrageous to become successful artists. Some could argue that Miley Cyrus was just having fun but the reaction from the whole world has shown us that this performance was not just for fun; it was planned to cause a stir. We’ve seen it in the past with Janet Jackson and Justin Timberlake performance at the SuperBowl in 2004. Awards shows such as the VMA’s provide the perfect stage for publicity stunts because they are watched by millions across the globe; images from these shows are easily shared and the artist can get as much attention as possible.

These stars are not the ones losing out though as they will continue to make millions and I’m sure they love the attention even though it’s mainly negative. Every year it seems to be something new, some crazy antic which sets the social media world alight and has the public talking. Miley Cyrus’ performance was bizarre but successful in getting the people talking. We can only ponder who the next artist to shock the world will be because with the current state of the industry, madness is the way forward and this is more than enough reason for another artist to try and shock the world in a similar way.