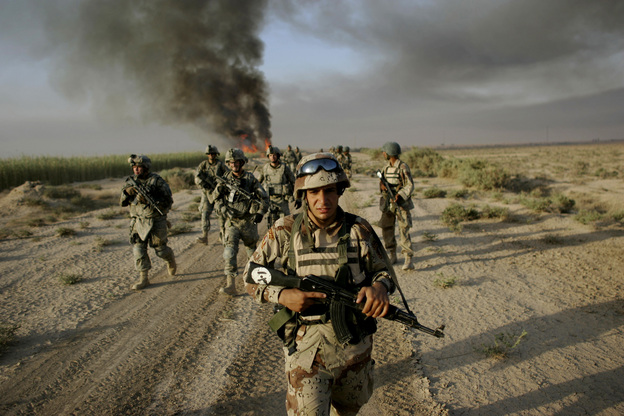 As the world waits with bated breath for the aftermath of these recent years of unrest in the Middle East to settle, following the unprecedented uprisings of the Arab Spring and ensuing civil violence, debate turns again to the West’s habit of interventionism. Have the shadows of the wars in Iraq and Afghanistan forced us to become isolationist in our international policy?

General Sir Peter Wall, the current head of the British Army, recently discussed the need for the public to ‘recalibrate’ their tolerance towards high-risk military operations in the face of future conflicts.  At a speech to the Royal United Services Institute in June he stated that the experience of our prolonged struggle in Iraq and Afghanistan has produced an ‘aversion to risk’ within British society that would not allow any military conflicts in the future to produce the best results, as risk-taking would need become part of the new paradigm of decision making.

If you analyze the current media and civilian attitudes, the risk averse nature of the public certainly becomes clear.  In every news report that follows a casualty, there is a crying family, a sombre newsreader and a question that pervades everyone’s mind; was it worth it? It is true that as a nation, we are now more sensitive to military casualties than ever before. This is due to several factors, the first being the doubt that surrounded the reasons for invading Iraq and Afghanistan in 2001. As the political justifications given for the invasions by Tony Blair and George Bush became increasingly criticized, the corresponding losses of the armed forces were viewed as ‘pointless’ in the eyes of the public. The perceived futility of our presence in those countries validated and increased the anger resulting from every loss, the result being that the decision to go to war is now increasingly intertwined with the emotional atmosphere of society; which, as a result of our never-ending Middle East campaigns, is considerably risk-averse. This is detrimental for the outcome of future conflicts, if they do in fact become ‘sharp and short’ as described by General Wall. A society that demands no casualties effectively neuters the viability of its military as a decisive tool of influence.

The second factor that has contributed to our risk averse view of conflict is the idea that the British people are becoming less willing to pay to fix international issues. As the domestic economy remains fragile, focus has turned inwards, making some question whether expensive military campaigns are viable in the current age of austerity. Estimates of the total cost to Britain for the invasion of the Iraq and Afghanistan are just short of £20 billion, a figure so stratospheric that it becomes ridiculous when you consider the failure of the attempted nation-building post-invasion to create a peaceful state. It is not only money that is hard to part with in risky situations; people are less willing to risk lives in the face of a problem that is not theirs than intervene to create peace or join in a struggle for regime change.

Take the current situation in Syria as an example; debate rages around a proposition to intervene in a bitter and brutal two-year struggle against Bashar al-Assad. Yes, it is a politically fragile situation for the region, and therefore the world. Yes, it is true that adults and children are being killed in awful numbers. Of course, al-Assad is a power mad dictator who should be removed, but at what price? Can Britain risk entering into another entrenched conflict with an enemy who is still politically powerful in the Middle East, and an opposition that are now being accused of committing the same human rights abuses as the regime they claim to fight? The use of chemical weapons has not only heightened the awareness of the civil war, but posed questions about how much control Assad really has on his military units, and if a ‘red line’ concerning such use should be a precedent for military action. Risk aversion is an inevitable consequence of such complex political situations. Nowadays, there remains a belief that Britain should only intervene when there is a clear right and wrong outcome, otherwise we may fall again into the gray areas of credibility on the international stage as we did in the first decade of the 21st century.

We are now in a new period of warfare, or ‘war amongst the people’ as defined by General Sir Rupert Smith, former Deputy Supreme Allied Commander Europe and a senior commander in the first Gulf War. If the previous decades were typified by ‘industrial war’, where tanks and soldiers fought each other on lone stretches of land for political gains, war nowadays is conducted in urban cities, involving the local populations and fuelled by religious and ethnic fervor, complicating any attempt at a peace process. This type of war, combined with a risk-averse society, is why we find ourselves lost when asked what we are going to do about conflicts in the Middle East. Our enemies are no longer nation states but loosely organized terrorist groups, harder to track and harder to defeat. The religious aspect of these disputes means that an ‘end game’ is often hard to formulate. Future conflicts ought to be planned with respect to a clear exit strategy, negating any opportunity for a conflict to extend and therefore more losses to be accumulated.

In order to restore the public’s confidence in Britain’s armed forces, David Cameron and his coalition government must consider the nature of future wars and accept that a high-risk strategy is needed to obtain any decisive outcome. There is no doubt that the loss of a soldier is a tragedy, especially if the political directives under which he fights under are questionable, but the military must be used to its greatest extent, and with that comes the inevitability of deaths in the chaos of war. We are no longer able to accept mass casualties in pursuit of victory, as we did in World Wars One and Two, as the reasons for fighting have moved away from good versus evil and towards religious clashes and ethnic conflicts. However, we need to accept that some fatalities will happen.

The British public must ready themselves for these new types of conflicts; strategically they are less risky than the never-ending engagements now familiar to us from history, though containing a higher risk. As Sir Peter says: our tolerance must be ‘recalibrated’ if we wish to maintain our position as a military power. If the army is funded correctly and trained for this new paradigm, a medium can be found between the need to support democratic struggles and intervene, and the risk-averse consciousness that pervades our society to this day.