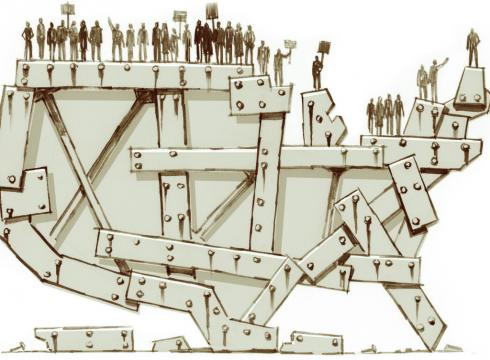 Mexico has a somewhat tarnished reputation in the eyes of the global public. Americans blame illegal Mexican immigrants for pushing wages down and crime up. Dodgy farming practices in Mexico started the H1N1 influenza pandemic in 2009. But above all, many see Mexico as a nation dominated by drugs cartels and organised criminals that are more powerful than the real government.

Of course, to blame the Mexican people as a whole for these problems would require prejudice to the point of racism. Nevertheless, it is true that Mexico’s attempts to modernise- for good or bad- have faced tremendous opposition from powerful undemocratic interests. The supremacy of the law over criminal syndicates is only being established through bloody conflicts on the scale of a civil war. Fortunately, it is leading to real progress, but at a sluggish pace and a very high human cost.

However, the long path to modernisation is not always as clear cut as the “cops versus robbers” scenario: education reform is currently an issue which has prompted a nationwide teachers’ strike. Legislation (supported by the dominant Institutional Revolutionary Party, left-wing Party of the Democratic Revolution and the conservative National Action Party) to enhance transparency and meritocracy in the teaching profession has been attacked as a massive step towards the privatisation of the education system. Government figures say that existing practices under which trade unions control appointments and posts can be inherited, or even bought and sold by their existing occupants, are limiting standards.

It is rare for a genuinely left-wing movement such as the Party of the Democratic Revolution to be on the opposing side of a unionised profession, which suggests that the Mexican government has a very strong case. Nevertheless, the reaction from the National Teachers Coordinating Committee trade union has been furious. When the reforms were being debated in the federal parliament, teachers stormed the debating chamber and forced MPs to debate in a nearby conference centre instead. And this is to say nothing of the violent aspects of the protests organised by the union in Mexico City.

Accordingly, most international observers have condemned the protests and the ongoing strike by the NTCC as illegal behaviour done in an unjustifiable cause. How is the teaching profession, or the children who benefit from it, aided by the sale of jobs to unqualified applicants? The protection of corruption was never the purpose of the international trade union movement, and any organisation which seeks to bar the best talent from joining a profession is not fit to describe itself as a trade union. Indeed, groups such as the NTCC are better described as cartels, sapping the health of the country’s education system as the drugs syndicates sap the health of the nation as a whole.

It should be noted that most teachers across Mexico have not taken part in industrial action, and that a minority are welcoming the linking of the quality and performance of staff more directly to career development and pay.

There is little doubt that the bulk of the reforms will be implemented: the most the strikes could achieve is a delay in their implementation and at best some minor concessions on certain points. In light of this, it is perplexing that the NTCC union is so ready to disrupt the schooling of over one million students in order to protest. After all, teachers are famously reluctant to strike for fear of adversely affecting schoolchildren, and in most cases will avoid prolonged school closures. Teaching unions in the UK present a good example of registering a serious protest while avoiding a severe impact on students. Unfortunately, the values of public service and egalitarianism have yet to spread to all corners of Mexico’s public sector.