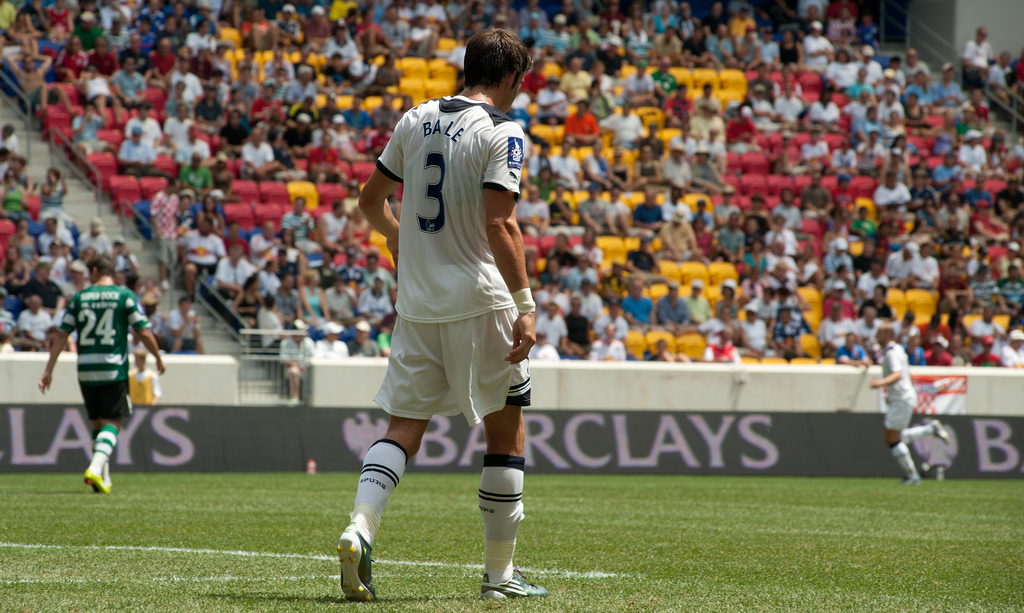 This week the world was stunned by Gareth Bale’s world record transfer move from Tottenham Hotspurs to Real Madrid for £85.3m (€100m).  The staggering sum is just another example of how lucrative the beautiful game has become and with the 24 year – old set to earn £300,000 many people are continuing to question why modern footballers earn so much money.

Bale’s move is certainly a commercial deal as well as a footballing one.  The 2013 PFA player of the year and young player of the year is certainly one of the best footballers in the world this year and has so much potential to develop into the best player in the world.  His versatility and skill has amazed opponents and team mate over the years, his quick progression has been mind-blowing; having started out as a left back not too long ago to becoming arguably the deadliest attacking player in the world.

Real Madrid will certainly benefit commercially from the deal; Bale will cede 50% of his image rights to Real Madrid and is guaranteed to bring in huge sums of money for the club through shirt sales; it’s no surprise why they can afford such an expensive deal, especially when they get some substantial financial support from the Spanish government.

Over the past decade extortionate sums of money have been spent on players for example Cristiano Ronaldo cost a staggering £80m when he signed for Real Madrid in 2009.  The cost of players is rising increasingly as the years go on: in 2000 Luis Figo was signed for £37m, in 2001 Zinedine Zidane was signed for £45m, and in 2009 Kaka was signed for £56m and that deal was in the same year as Cristiano Ronaldo’s which cost £80m.  Arsenal manager Arsene Wenger even said last Friday: “Look, for me there are very, very, very, very few players who economically justify or [it] makes sense [to] pay over £50m [for].”  The only reason why these clubs can finance these expensive deals is because of lucrative sponsorship deals they have, television rights and because of the sale of the use of their stadia.

The wages these footballers earn is also questionable.  Bale is set to earn £300,000 a week which equates to $69 a second.  Bale’s new contract means that he will double the yearly salary of UK Prime Minister David Cameron within just a week of work. Furthermore, in 2012 Samuel Eto’o earned £364,583 weekly, which equates to 60p a second – a sum which is sure to make anyone jealous.  If we look at the economics behind the high wage rate footballers earn we may make some sense out of it.  Firstly, many clubs have huge sums of money through television rights and advertising deals, on top of this there is a low supply of footballers like Gareth Bale who possess so much skill and talent.  If you add the demand of the world’s population to watch footballers of his quality weekly it is no surprise why the wage rate has lofted up.  It is the most popular sport in the world and we have to remember that it’s only the best players who earn anything near what Bale will earn at Real Madrid.  We have to remember that the football transfer market is just like any market and is controlled by the laws of supply and demand; wages are determined by the income of this booming industry.  People who defend the salary of footballers (yes there are some people who do) argue that the money that they spend boosts the economy; they also argue that the tax from these sky – high wages will help the economy.

However, when I explained the Bale deal to my girlfriend who is certainly not a fan of football she said something very interesting: “I think that people that do jobs that save people’s lives such as fire fighters and doctors should earn more money.”  As an ardent football fan even I had to agree and I also agree when people argue that soldiers should earn more than footballers.  The problem is that football is a business and because it’s such a lucrative industry players’ wages will continue to sky rocket.

We have to remember that being a football players is a huge risk, many get injured, many don’t go onto higher education and have no back up and all of them give a complete commitment to this one sport and these are also reasons why wages are so high; they give up all privacy and their families also have to suffer because of this.  Whether footballers deserve these wages is down to opinion but the purpose of this article is to give you an insight of how rich the football industry is and how clubs can afford to pay such large sums for and to players.  It’s just a shame that adoring fans have to finance these big money moves but with financial fair play regulations set to take effect this season let’s hope there’s a break to this incessant spending in future transfer windows.

Why Is Everything Going Wrong For Miliband?