Why Is Everything Going Wrong For Miliband? 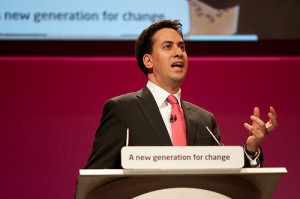 Still struggling to wipe that egg off your face Ed? The events, which occurred on the Wednesday of last week, saw Ed Miliband being embarrassed by members of the British public as eggs were pelted at him on a visit to East Street market in Walworth, south east London. However it seems recent activities within the Labour Party have left him with bigger fish, or shall we say eggs, to fry.

Since becoming leader of the Labour Party Miliband has not had it easy, and it seems the past week or so has not been looking much brighter for him. From stealing a victory from his widely popular brother David  (something which Boris Johnson has been keen to comment on in the past few days) to say he has been welcomed as the face and voice of New Labour would be a slight exaggeration, to say the least.[1] Attacked by his Conservative counterparts on a regular basis and disgruntled politicians within his own party, Miliband has been struggling from the offset to win respect within the political sphere. In the past few days it has become apparent that despite his three years as Labour leader, key figures within the party seem to still lack faith in his ability to lead. Such an argument has been loudly vocalised by former deputy Prime Minister Lord Prescott and Lord Glasman, founder of the short-lived Blue Labour movement.

Criticism from such high profile Labour figures is critically damaging, indicating a lack of party unity and collectivism in the beliefs and ideas of the party, which, ideally, should be personified and represented by their leader.  It also shows Ed to be a somewhat weak leader who is unable to keep these rebellious figures in line, leaving them free and confident to speak against him. Furthermore, to be so openly criticised by the academic Glasman, Ed’s one-time guru and founder of a movement that many have speculated could define Miliband’s leadership shows Miliband to have lost direction with even his key supporters losing faith. Although Shadow business secretary Chuka Umunna has valiantly spoken in favour of Miliband, accusing the pair of causing ‘hysteria’, claiming in the build to the next election Miliband and co shall be “turning up the volume even louder” is this really enough?[2] Prescott and Glasman’s cries for the leader to “show he is a grown up” and make the radical changes needed in the selection of Labour frontbenchers and policy ideas to develop “a clear set of policies and principles” so the public know what Labour stand for have seen some support in a recent ICM poll carried out by the Daily Mirror.[3] The poll reflects the electorate’s disillusion with the party, recording 42% of voters were unhappy with Miliband’s leadership of the Labour party and a mere 21% recorded as being satisfied.[4]

However it does not seem to be all doom and gloom for Ed. Former Home Secretary David Blunkett has been another senior official that has spoken up, but with a more positive feel to his tone. Although confirming the ‘frustrations’ within the party over a lack of clarity in the party’s direction and poor public engagement, he has not been entirely critical of Miliband, likening him to Attlee, Britain’s post WWII leader.[5] Attlee, Blunkett stated, may not have been the “most vibrant” proponent, but nevertheless, was a fantastic leader.

So is there hope for this novice leader? Will he step up to the plate and be, as Blunkett has indirectly suggested, the next Clement Attlee or will he fall flat on his face? Only time will tell.