Is Larry Summers Fit To Chair The Fed? 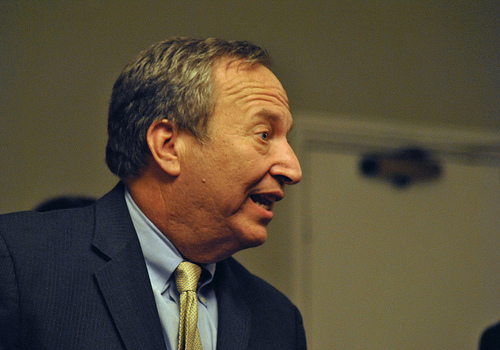 As the sun sets on Ben Bernanke`s tumultuous tenure as Chairman of the Federal Reserve, the debate over who should be the next head of the Fed is ruffling a few feathers across the Atlantic. Will it be Larry Summers, or the current Vice-Chair of the Fed Janet Yellen? If current sources are anything to go by it appears Obama`s putative choice to take the helm is indeed Mr. Summers. If the President does opt for Larry Summer, it will be decision bound to cause quite a stir amongst ordinary Americans. It is not that Summers lacks a track record in high level senior roles, indeed he has been: Treasury secretary, chief economic advisor, and a former President of Harvard. The problem is it`s a record many consider lacklustre, even flawed.

A history of bad decisions

Critics regard the former Chief Economist of the World Bank as an unpredictable chancer whose shenanigans have wrought havoc at every available opportunity. During his time as the President of Harvard he is thought to have cost the University $1 billion dollars in risky derivatives positions.  His ill-fated tenure also included unashamedly implying that the underrepresentation of females in the upper echelons of academic and professional life were the result of “innate differences.” His comments sparked immediate controversy, and after strong criticism from professors, women`s groups and students he would later resign.

As Deputy Secretary of the Treasury during the Clinton administration, Summers was once again responsible for a litany of disastrous decisions. One of which was to quash the efforts of the Commodity Futures Trading Commission to regulate the “highly secretive” derivatives market.  Speaking of the Wall Street dabblers involved in the market at the time Mr Summers said: “The parties to these kinds of contract are largely sophisticated financial institutions that would appear to be eminently capable of protecting themselves from fraud and counter party insolvencies and most of which are already subject to basic safety and soundness regulation under existing banking and securities laws.”

He couldn’t have been more wrong. As he revelled in the radiance of  his ignorance alongside the two other horseman of the financial apocalypse that ensued, most notably former Fed Chair Alan Greenspan, and Treasury Secretary at the time Robert Rubin. They unwittingly set in motion a plan that would bring the financial system to its knees. In 2008 the derivatives market did indeed crash.  But when the chickens did eventually come home to roost it wasn’t Summers, Rubin, and Greenspan being poked in eye by these indignant chicks, but ordinary Americans who lost their homes, jobs and savings.

But what of Summers`s main adversary to the role Janet Yellen? In some respects she seems the antithesis of the flagrantly haphazard Summers. The picture that emerges of Ms.Yellen is one of a calm astute thinker, who has been for the most part correct in her appraisal of the turbulent past few years of crisis, recession, and lacklustre growth. A former President of the San Francisco Fed, and Vice-Chair of the Fed since 2010; prior to the Great Recession placing its stranglehold on the U.S Economy; Yellen voiced one of the most prescient diagnoses of the impending crisis. In 2007 she claimed: “the shadow banking system” the complex financial system that provided credit to American consumers was shutting down and represented a real threat to the economy.

She also voiced strong concerns about the o-t-c derivatives markets of which Summers lobbied so hard to deregulate saying: “CDS spreads from major financial institutions with significant mortgage exposure, including Freddie and Fannie, have risen appreciably,” and as result of these large exposures: “the possibility of a credit crunch developing and of the economy slipping into a recession seems all too real.”She later urged forthright action to lessen the blow.

Summers is undoubtedly a smart man with plenty of real world experience, he has assisted in framing various policies and in some quarters is praised as a decisive and brave thinker. But given his rather chequered rap-sheet in this particular instance he should certainly be overlooked. He was the golden goose who laid the eggs of Wall Street excess. He clamoured for less regulation when it was palpably obvious financial institutions needed more regulation. Washington does not need another handmaiden of Wall Street; they [Wall Street] already have a strong presence in former Goldman Sachs Chief Executive now Treasury Secretary Timothy Geitner. Given the Fed`s remit of protecting Main Street and Yellen`s rather impeccable track-record of foreseeing calamity when others do not, she should undoubtedly be given the role ahead of Summers. If the President does indeed pass up the opportunity to appoint Yellen, and decides to go with Summers instead; I suspect Americans will be bracing themselves for plenty more summers of discontent.