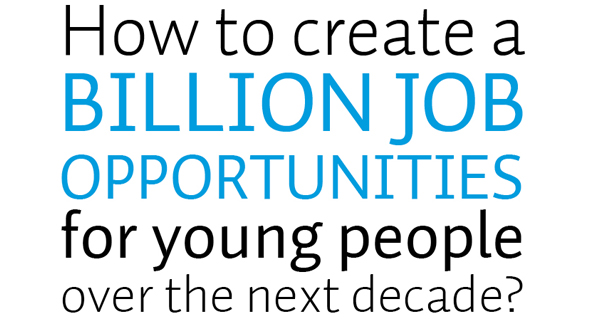 Youth unemployment is spiralling out of control, with 73.4 million young people from around the globe currently out of work. In Greece, roughly 60% of all their young are out of employment, while in the Middle East it’s 30%.

This trend is a dramatic increase, compared to the average percentage for adult unemployment, which is roughly 4%. The International Youth Jobs Summit, stated that in the coming years we, as a planet, must create 1 billion youth jobs or face the consequences of wasting young talent.

The Global Youth Job Creation Summit, which occurred on the 13th of last week, had tasked itself with creating ideas to tackle this ever growing problem. The Summit put together some incredible people and organisations, to work on and talk about the task at hand. Lord Young, the first of the keynote speakers, began by stating that the number of small firms, employing ten or less people, has rocketed since the 1980s from around 800 to nearing 1 million.

Lord Young believes this increase in small companies and the decrease in jobs is mainly thanks to the internet. He reminisced that companies once took pride in doing many different things, while now they take equal pride in subletting all of what they do.

While the number of stable jobs has decreased, the number of self-employed peoples has increased dramatically to 3.8 million. Lord Young has been pushing to get more people working for themselves, with the government putting aside money for star-up loans and mentors to help anyone whom is interested. Self-employment is an interesting concept to job creation, if you can’t find a job, make your own. However, how many people are capable of creating a business? Not forgetting that one third of all businesses fail in the first year.

Despite the dangers, self-employment is taking over and seems to be the way of the future. Hence it must be engrained and encouraged both at the level of education and at the government level. Lord Young mentions that smaller firms are now being giving the option of taking on large government contracts often only left for large firms.

There were several issues raised with self-employment however, one of which being that the education system always talks to students about working for those major known companies, but never about the possibility of working for yourself. Another issue was also raised with bureaucracy, as small firms can’t often work with the incredible amount of bureaucracy and health and safety required.

Andris Piebalgs, EU commissioner and the second keynote speaker, talked more about the EU’s issue with job creation and the rest of the world. Andris states that Sub-Saharan Africa is a major issue as unemployment is low, since there are no safety nets there. However, many of the people are forced to do jobs that pay as little as a dollar a week.

Some parts of Africa are combatting this, according to Andris, by offering short term solutions, such as improving and helping the agricultural sector grow. Barundi is an excellent example of good short term development. Andris also believes that such growth in certain sectors could help EU unemployment rates. With 23% of youth unemployment in the EU, with Greece and Spain taking 50% of the total unemployment, something must be done.

Andris goes on to mention that a good example of low unemployment is Germany and Austria, which both have the lowest unemployment rates in the EU. To support the growth of jobs, the EU has offered 8 billion euro in start-up loans for new businesses.

He urges all governments to incorporate young people in the agenda for change, as the next generation will inherit the earth once the current generation are gone. According to an EU poll, the UK is leading in giving young people a chance to thrive in this new wave of entrepreneurship.

It was clear, after the two keynote speakers that young people need to be empowered and that government jobs are not the answer. Entrepreneurship and small companies are. Empower the young to create the jobs themselves.

During the panellist debate, it was clear that a similar trend was being created, with one important twist: The panellists referred more to education, rather than offering money for start-ups. Jeremy Lefroy MP, Chair of the International parliamentary network for the World Bank, stated that one ‘can do loads with small amounts of money, if it’s well managed’. He also mentioned that economy needs to be transformed for jobs and inclusivity.

With the example of England, Jeremy believes it is all to centralise yet for an entrepreneurial society to form. Giving freedoms on the ground would create more jobs, stated Jeremy. Continuing on the panel’s aim to create more youth jobs, Nadia Elhaggagi, policy officer at the EU commission, talked about the EU’s Youth employment policy; the Youth Guarantee.

The Youth Guarantee is a pledge signed by nearly all countries in the EU to put all their young people in employment by four months of them being out of work, education or training. The reason behind the 4 months, she says, is because after 4 months the unemployed begin to lose the will to work and progress.

The Youth Guarantee also offers career building opportunities, such as; traineeships, which offer training and guidance, plus micro-loans, which open the door for young people, with no previous credit history, to acquiring the funds they need to develop their business.

A Speaker for Be the Change Academy (BTCA) in Nigeria, as talked about education being the central theme, stating that Africa does not need money, it needs knowledge. The BTCA offers 8 weeks training and 3 weeks to create a business plan for your business. This is aimed at creating an entrepreneurial culture in Africa.

As the panel discussed further, it became clear that education and freedom were the two most important elements in getting the 1 billion new jobs that the world needs. Andrew, indeed states that most growth comes from small and medium businesses, hence it would be a benefit to the world, not just to the next generation.

Ravi, a 22 year old green energy business owner states that young people are the future of the planet and ‘we need to be heard’. He also mentions that we need young people with practical skills, not degrees. He ends his speech with the idea that the future lies in a ‘Green economy, which is youth powered, youth led and youth governed’.

The table debates which ensued made it clear that everyone had come to the same conclusion, education was the issue. In the UK’s case, we are obsessed with league tables, offering to send all students to the best universities in the country or even the world. Has anyone that has children asked what then? How many of them become employed? Our short sighted view of A* grades and league tables has destroyed the system that should be preparing all young people for the world.

Andris Piebalgs mentions nearing the end of the conference that when he was in university and in education it took him 7 years to finish his degree, he was repeatedly asked to concentrate on studying and stop all other activities, yet it was these other activities that got him into the career he chose, not his education.

Our urge to force our next generation to only learn one skill, how to take exams, may for many new entrepreneurs to give up on their dreams, maybe we are not all meant to go to university, maybe, just maybe some of us are not meant to be bureaucrats?

The conferences two key themes, it seems aimed primarily at education and pushing more young people into self-employment. Maybe the future is leaden with leaders and entrepreneurs. However, one must not forget that only 20% of the population can become successful entrepreneurs. We have lied to many young people about how easy it would be to get a job after university, let us not do the same with entrepreneurship. Instead, let us give them the tools necessary to make their own choices, let us educate and give them the skills they need, for all walks of life.