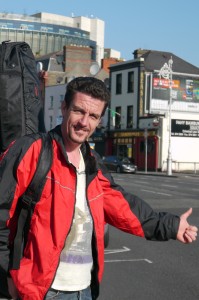 Irishman Colin yet to spend a penny on his travels

Six weeks in to his global moneyless odyssey and Dubliner Colin Turner has already traversed eight countries without spending a single penny,

Colin, founder of the Free World Charter, left Ireland at the end of July with the intention of proving that a world without money is possible. Relying on the goodwill and hospitality of people along the way, the musician has passed through Northern Ireland, Scotland, England, France, Belgium, Holland and is currently in Germany.

His planned route ahead will take him through Austria, Hungary, Bulgaria and Turkey before embarking on the tricky Asian leg of his mammoth trek. Offers of help and support from likeminded individuals should see Colin reaching India in the coming months.

Colin exclaimed “It’s been absolutely incredible. I have been hosted by many families for one or two days each since leaving Ireland. They are offering me food, accommodation, travel and pretty much anything completely unconditionally. Their compassion and recognition of my message has been very uplifting.

“My journey is to prove that living without money does not mean being poor, suffering, or going hungry. There is no reason for anyone to fear anything as long as humankind has each other for support. We can all live well and prosper. The money system stands in the way of our natural cooperative and compassionate traits and holds us back from achieving incredible things,” added the Irishman who gave up everything prior to his departure including giving away most of his possessions.

Colin will be producing a video of his trip and has already charted the generosity of all of his hosts. He’s already been featured extensively in national and international media including the BBC and global news agencies.

“My work with The Free World Charter, an online movement with almost 40,000 signatories advocating the evolution beyond money and towards a sustainable, technological and caring society, is striking a chord with everyone we meet.

“I think that we are slowly waking up to the folly of our ways especially in light of a truly fragile global economy that is built on debt, debt and more debt. It’s a system that could collapse at any point as we saw in 2008 and it’s vital that we debate what could follow the next bubble to burst, a bubble that could render money completely worthless. Hopefully I’m adding to that debate in a small way.

“Everyone I’ve met senses that the world is about to undergo some quantum change but they don;t know what it is. Every single person I’ve met agrees that our current system is no longer working and that change is on the way. Not everyone agrees that the future is moneyless but it takes time for most people to see the possibility and potential of it.

“Ultimately the sheer common sense of it prevails. Nowhere else in nature does any form of direct exchange for resources or actions take place. It is part of an antique system devised when most of mankind’s needs and desires were difficult to source. Our level of technology has now surpassed the need for this system. We can provide a high standard of living for every person on this planet through technology, cooperation and much better education,” added Colin who has faced a few obstacles along the way.

“I have gone one or two days without proper meals but really this is just due to bad organisation more than anything else. Using the internet to arrange hospitality in advance hasn’t always been easy.

“Thankfully I am learning more each day and this has become less of a problem. Overall, the travel has been an amazing success. I am eating and sleeping well and I can say the kindness of strangers is very much alive and well out there!” concluded Colin.

Taking to the Stars: Interview with Mars One